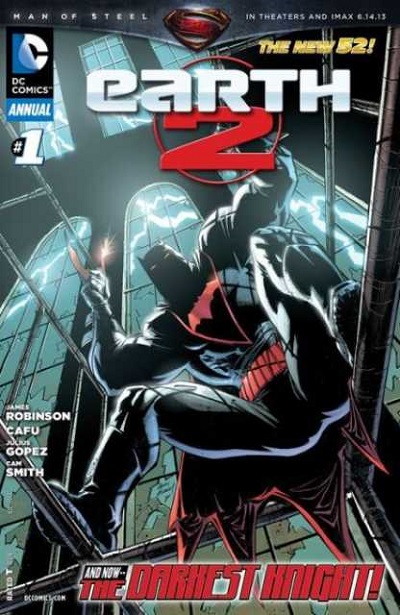 Art by Cafu and Julius Copez

World-building always holds a soft-spot in my heart.  Taking a setting, detailing it to the N’th degree, and planning out how these random pieces and parts would react to various stimuli is almost more exciting to me than the actual conflicts that can come out of them.  Partially due to my odd sense of fun, Earth 2 has been a title I always look forward to each month as we deal with the constantly expanding view of this alternate Earth with each and every issue.  With a brief rest of this building as we introduced Dr. Fate to the scene last arc, Robinson now takes it full steam ahead once again; broadening the picture of this still recovering world as seen through the eyes of one who lost it all in the Apokolips Wars, the Atom.

Al Pratt suffers with the survivors guilt of being the only man left standing in his battalion on that fateful day.  But taking that guilt and tempering it into duty now sees him as a loyal soldier in the World Army, determined to not let these fantastical elements cause yet another tragedy like the ones he faced in the preceding war.  Chasing down dealers in Apokoliptan technology around the world, he is unwittingly aided by a new player on the field long presumed dead.  But will their combined force be enough to tackle the technology of Apokolips?  Can Mister Miracle and Barda find the Batman that holds the answers to their quest before Fury can track them down?  And has the Atom’s struggle been in vain as war looms between the World Army and the newly claimed country of Dherain now that Steppenwolf has taken its helm?

To get it out of the way, I was actually quite sad to hear of Robinson’s departure from this title.  He has emphatically claimed this little corner of the DCU and gone to great lengths to build a setting that is comfortable, yet vastly different in its approach to a world filled with super-individuals.  This issue is no different, and continues that direction by delving into the heart of the World Army itself.  And while politics and hidden agendas are the rule of thumb within its jurisdiction, we get to focus on the ideals of its champion, Al Pratt, as he struggles to do the right thing for the right reasons. Beyond the world-building, this has been one of the more positive angles of the title, as each member of the cast has an individualistic flare as to what drives them and effortlessly sets the stage for natural conflict between these various personalities down the road.  There is a tone of heroics overcoming the morally grey fog that the world has been thrust into, which makes these individual motives all the more important as each are pulled onto the world stage and forced to make the hard decisions that their ideals request of them.

As an added bonus, the stage is set for the newest mystery, that of who has donned the mantle of Batman after his demise in the final battle of the Apokolips War.  This is already staged as a mystery for all of the characters involved, even as we get a sneak peek into the mind of this newest replacement.  It is an angle of the story that could play out quite well if not strung out for too long, and an element that honestly has my curiosity piqued.  Obviously, the buildup will hinge upon the quality of the reveal, but I am more than content to come along on the journey in trying to figure it out up until then.

We do not get the absurdly beautiful pencils of Nicola Scott this issue, but in her stead Cafu and Copez are able to deliver everything that the title requires and then some to make for a good chapter.  Understanding that the setting is the real star of the title (it is called Earth 2 afterall), the pair put in the painstaking work of fully realized and detailed backgrounds that show the state of the world through the subtle subtext of a crowded street or the war-ravaged wreckage of Gotham City.  Not skimping on the characters themselves, there are times when the emotional responses on the faces of these individuals even surpasses Scott’s work on the title previously (though it is tough to hold a candle to her vision of the world at large).  While there are some very minor issues in staging, the two come together to provide an essential companion to the story being told and bring a more energetic feel to the action contained within.

Buy.  Of course, this is absolutely a biased opinion (but what review is not) as the title is practically aimed directly at my sense of entertainment.  But those who have enjoyed any of the previous chapters will start to find some payoff to the situations that have been seeded throughout the run, all while starting off on the new adventure of unmasking the replacement Batman of Earth 2.