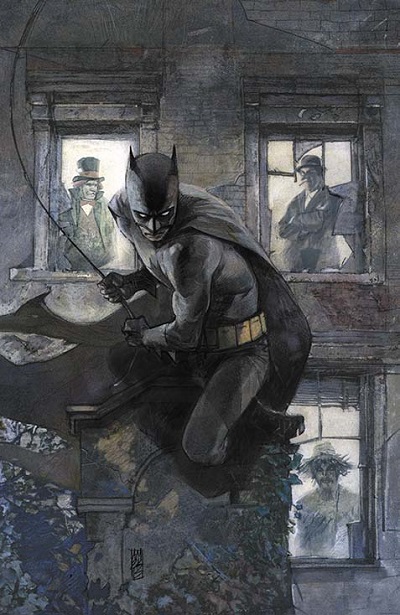 They say a hero is only as good as his villains, and comics have been a clear indicator of that fact over the years.  The most obvious example of such is in the case of Batman.  Already more than a solid character in his own right, it is his massive gallery of colorful, exotic, and compelling rogues that send the adventures of this one particular character into the spotlight of popular culture and stardom above his fellow colleagues.  As such, I am always fascinated to get the point of view of the antagonist(s) in this eternal game of cat and mouse.  Seeing the city of Gotham from the eyes of characters who have worked just as hard to elevate the setting, but only receive a boot to the face in payment for their services rendered.  And that is exactly what we get to experience in Batman: The Dark Knight Annual #1.

The Penguin.  The Mad Hatter.  The Scarecrow.  Each has plagued the Dark Knight in their own way and proven to be worthy foes alone.  So when each receives an invitation to come together as a team one Halloween Eve, curiosity compels them to answer the call.  But once they all discover the ruse of their meeting, could it all have been an elaborate trap by the Bat to lure them out of their protective strongholds?  Can these three villains set aside their differences long enough to overcome, or even escape, the ever tightening noose of the trap that has been set for them?

There have been complaints over recent years about the evolution of Batman to an almost god-like status.  Always prepared, contingencies for everything, practically infallible.  One of the biggest distinctions of Hurwitz’s run to date on The Dark Knight has been that he has most certainly set all of that to the wayside; painting a more street level Batman who is constantly making errors in judgement and execution.  So to see Batman in this Annual enacting the most efficient plan he can to survive another Halloween in Gotham is almost refreshing in contrast to the run thus far.  Even more so, the addition of huge dollops of humor as the trio of villains complain about their lot in Gotham and how they drew the short stick of arch-nemesis’ within the DCU really adds a personality back to these characters that has been missing in their ultra-violent and grim portrayals thus far.  Combined, it comes together to make a fun little side story that injects some mirth back into the title while giving readers who may have missed previous storylines a snapshot of what motivates these rogues to do what they do.

The artwork by Kudranski maintains the serious tones that have hallmarked his time on the title to date, and run in stark contrast to the more humorous sections of the issue.  What really acted as the glue to make the story work though, was his constant ratcheting of tension through staging and shadows; bringing the reader along for the ride as these three non-martial villains try to discover a way out of the trap they have walked into.  There were a few sequences that made me pause and re-read for clarity, but it actually feels like it was setup that way as we follow along with the main characters; never quite sure if things were just a trick of the light or what they feared.  My main complaint still lies with the facial stylings he has chosen, most notably the eyes, which do little to sell me on emotions the characters are feeling and instead always seem dead or kooky.  This also appears to be a conscious design choice on his part, but it is really the only thing that has left me personally cold on his work to date.

Give it a shot.  Still maintaining the more horrific overtones of how vicious these villains are, this annual also adds in a fun story of what happens when three psychopaths find themselves forced to rely on each other from their perspective.  It’s an amusing read overall without short-changing the antagonists that have helped make Batman who he is, and a welcome reprieve from the constant soul-crushing batterings that the Dark Knight has taken in the run thus far.  Plus, you may find out their backup employment plan should this whole life of crime thing not work out for them.