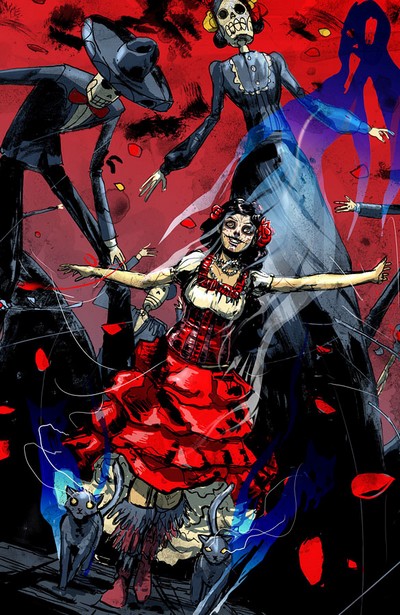 In case you haven’t been following my reviews of this series, I’ll give you a quick catch up. Dia De Los Muertos is a series of books, all inked by Riley Rossmo, featuring short stories based on the Mexican holiday Day of the Dead. Each story is written by a different, talented writer and is it’s own very unique tale of what the holiday can mean.

Issue #3 begins with Return of the Dead, a wordless but terrifying story of power and death. A small boy disappears during Dia De Los Muertos celebrations, ending up in the hands of a brutal killer who is fond of recording his tiny victims’ deaths. All seems lost for the child until some unexpected allies show up to save him. This one is touching, scary and sweet. Not to mention impressive in that it’s so full of emotion without using a single word.

Lonesome is a sad love story by Kurtis Wiebe (Peter Panzerfaust) that explores the concept of ’till death do us part’. We get to follow along as a man re-visits falling in love and the seven dates that changed his life forever. I liked Lonesome because it isn’t so obvious. It begins like a hopeful narration of new love that can’t be defeated but it ends like a mournful lamenting of love that died too soon.

The final piece in this issue is called Day of the Dead 3000. Unfortunately, I’m not at all sure what this story was reaching for. A super villain named Mother Slaughter sends her death bots to end a hero named Ultra Muertos. When the murder bots succeed, Ultra Muertos sends his spirit or energy (or something) in to the body of his drug addicted grandson, because apparently Ultra Muertos lives on in whatever family member is available. The new hero faces off against crazy mama and her minions, lots of flashing and smashing ensues. This one confused the heck out of me; it was busy, silly and just felt out of place among the romantic and eery material in the rest of the issue.

Verdict: You should be buying Dia De Los Muertos. Besides the fantastic artwork of Riley Rossmo, these books are filled with imaginative and spooky stories. Rossmo develops his art in a fresh way to complement each story perfectly. Great idea for a series that platforms lots of talent.