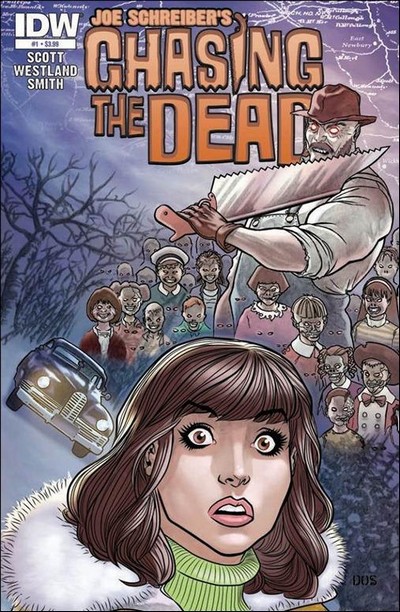 Chasing the Dead is the debut issue in a new miniseries based on the novel by Joe Schreiber (Red Harvest, Death Troopers). IDW promises that this new series will “bring chills down your spine”. Did it? Yes, eventually.

This story starts out with a creepy scene of a local murderer attacking a couple of kids. He’s looking for some young eyes. Yeah, I said it was creepy. This is the back story of Sue and her future husband, Philip. It’s also the dirty secret that ties Sue to the creepy voice on the phone in her present; the voice informs Sue that her baby daughter and the nanny are at risk of a merciless death if she doesn’t follow his directions exactly. The phone call starts off a journey through several towns, fueled by the fear of what could happen to little Lily if she fails to satisfy the creep’s demands. The journey is based on an old story of a terrible killer who terrorized children, leaving them dead and minus their eyes.

This book starts off feeling like your average ‘kidnapped kid and checklist of directions for the panicked mom to follow’ story. It plays that game for awhile. Then, shit gets real and things are bloody, ugly and the dead come back. Chasing the Dead is a supernatural thriller in formula but a horror tale in material. Once it gets rolling, it’s very eerie and brutally playful. I can’t say the artwork blows me away, but it’s not terrible. Just sufficient. The writing is well developed and timed wonderfully enough that by the time I was halfway through, I was anxious enough to see what comes next that I didn’t even notice what the art was lacking.

Verdict: Read it. Great story if you like a thrill with some hard terror and a side of supernatural voodoo. The art being less than impressive means I wouldn’t consider it worthy of keeping on my shelf, but the book is fun enough that horror readers shouldn’t pass up the experience.