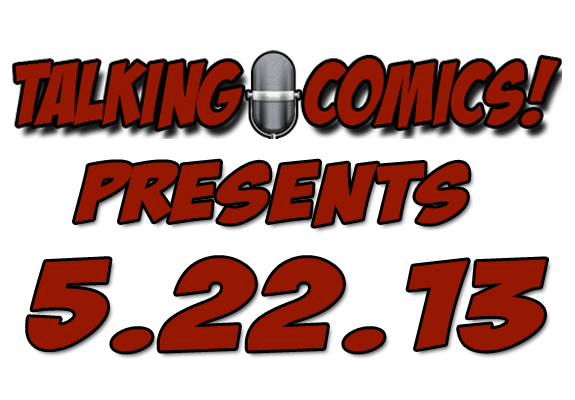 Well, enough with the who, where, what, why and how, I give to you Talking Comics Presents for the books releasing on 5/22/13. 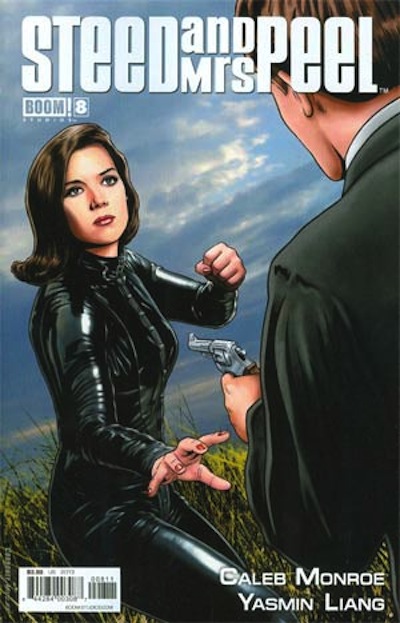 Boom Studios says: “BRAND NEW ARC! A perfect jumping-on point for new readers! Last issue, John Steed and Emma Peel entered a quiet little town on what should have been a simple mission – but things were definitely not as they seemed! Now the super spies fight not to become the next victims of this city with big secrets…”

Bob Reyer says: “Sadly, this fun piece of spy stuff is coming to an end soon, which is a shame, as the various creators, particularly initial scribe Mark Waid and current writer Caleb Monroe, have brought The Avengers (Patrick Macnee was John Steed before Tony Stark was Iron Man!) to four-color life in a way very satisfying to fans of the show! New artist Yasmin Liang is a stand-out, as her ability to create true-to-life likenesses of Diana Rigg and Mr. Macnee, but which are also part of a “comics world”, has taken this series to a higher level! Kudos to all!” 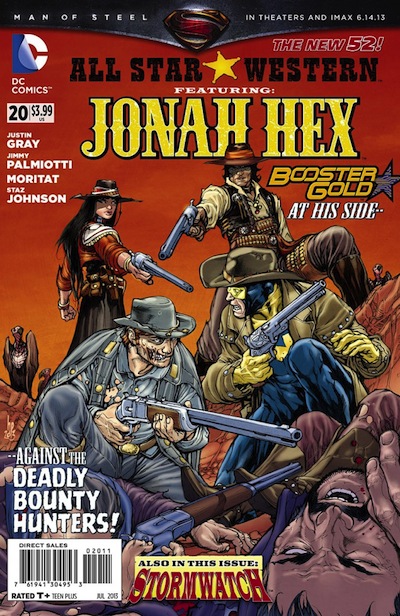 DC Says:  “The future collides with the past in this issue as [REDACTED] causes problems for Jonah Hex. And in the backup story, a never before seen Stormwatch team takes the spotlight!”

Sean Lamont says: “It’s still surprising to myself, but I’m really looking forward to this week’s issue of All-Star Western #20!  I had a good time with the last chapter of the Booster Gold/Jonah Hex old-west pal-around time, and I’m sincerely excited to see where this title is going next after peeking ahead via solicits.” 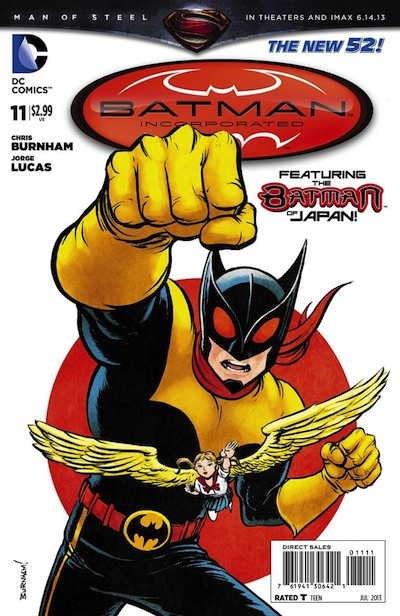 DC says: “Batman’s world has been devastated by his war against Talia, but is he willing to give up on his own humanity?”

Bobby Shortle says: “The days of Batman Inc. are coming quickly to a close, but that apparently will not stop the series from continuing to take chances. Batman Inc. #11 marks a departure from the ongoing battle with Talia to focus on the Batman of Japan! We haven’t had an issue focused on this region since very early in the run, and so I’m excited to head back to the far east for some shenanigans. I’m also intrigued to see what usual artist Chris Burnham can do as writer.” 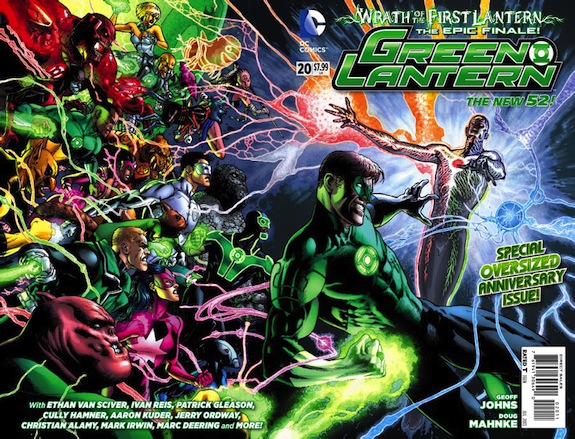 DC says: “It’s the final battle against the First Lantern and the Guardians in this, the extra-sized finale of Geoff Johns’ historic run on the title! Plus, don’t miss a special retrospective on Geoff’s run on GL!”

Bobby Shortle says: “It is here, the end of one of the most historic runs in comic book history. It would seem almost impossible for someone to wrap up 10 years of work in a satisfying manner, but if anyone can do it, Geoff Johns can!” 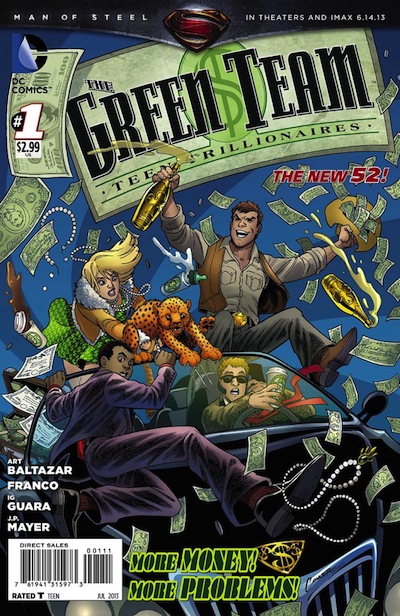 DC says:  “INVENTORS! EXPLORERS! ADVENTURERS! Do you need money to finance an important project? Then you should set up a meeting with THE GREEN TEAM!”

Sean Lamont says: “My roll-the-dice pick for this week goes to The Green Team, which is kicking off its new series this Wednesday.  In the hands of creators that have proven to me their capability to write fun and amusing stories, I’m more excited than I feel I should be for a title so outside my knowledge base.” 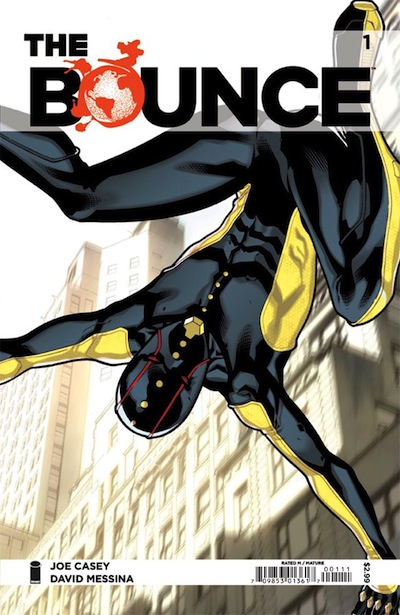 Image says: Meet the ultimate slacker superhero for the 21st Century! Jasper Jenkins is a super-head AND a super-hero! He’s relatable AND reliable and he’s embarking on the adventure of a lifetime!The sensational debut of the new feel-good hero of the decade! You can’t afford to miss it!

Joey Braccino says: “Legendary super-subversive writer Joe Casey takes on slackerdom and superheroism in this debut issue of yet-another-promising new comic series from Image. After Butcher Baker and Sex, Casey seems to be right at home with Image’s creator-driven publishing strategy. Bounce might just be another winner; check it!” 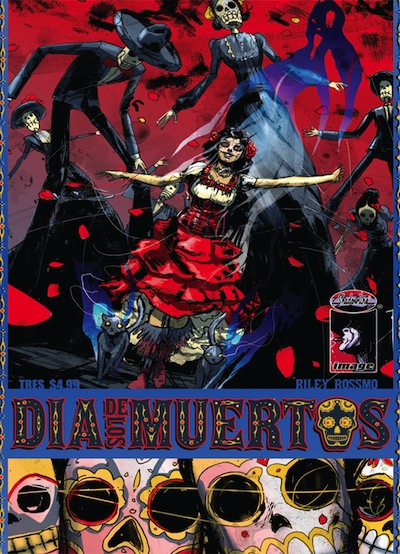 Image says: “Inspired by the Mexican Day of the Dead, artist extraordinaire, RILEY ROSSMO, interprets stories from three of today’s top writers. From KURTIS WIEBE (PETER PANZERFAUST) comes a heartbreaking love story–in this world or the next. JOE KEATINGE (GLORY, HELL YEAH) offers up Day of the Dead 3000. As Ultra Muertos falls at the hands of Mother Slaughter, his grandson takes over the mantle with a death wish for all-out apocalypse! And New York Times bestselling author ALEXANDER GRECIAN (PROOF) tells a tale of ghost children.”

Melissa Megan says: “Most excited about Dia De Los Muertos because it’s been an incredible, really unique series so far with an impressive team of writers and artists.” 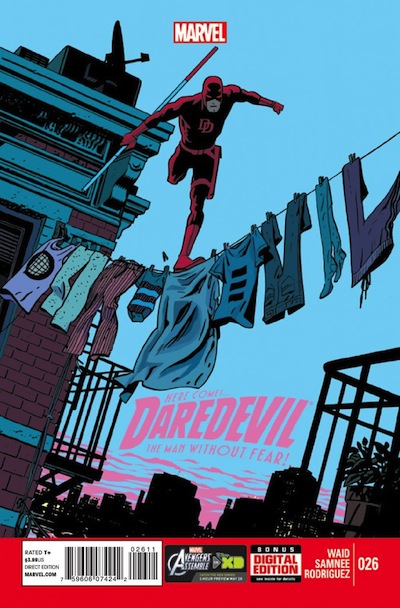 Marvel says: “A DOUBLE-SIZED EXTRA-vanagnza celebrating the third-year of the acclaimed series! Face to face with his opposite number–a foe Daredevil cannot beat! What is his connection to the accident that created Daredevil? PLUS: As Foggy deals with his cancer, Matt turns to one of the brightest guys in the galaxy for help. • Here comes…Iron Man!”

Bobby Shortle says: “Daredevil #25 was an amazing issue, one that introduced a new foil for Matt Murdoch while continuing to advance the story of Foggy Nelson’s illness. I cannot wait to see how #26 carries on from the cliffhanger we were left on, plus we get a Foggy centric back up!” 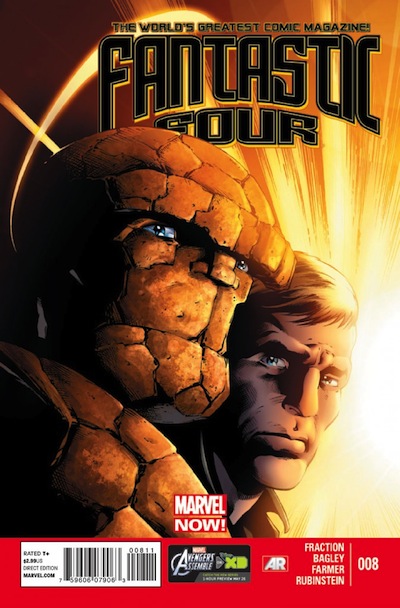 Marvel says: “One day a year, The Thing reverts to his human form. This year… Ben Grimm is going to go home again — as Ben Grimm! • What was Yancy Street REALLY like back in the day? And how long until the ever-loving’ THING makes his appearance? • And meanwhile, the tables get turned in Franklin and Val’s relationship… and when these two siblings have a rivalry, all bets are off.”

Bob Reyer says: “Over the last couple of issues, we’ve gotten glimpses that all is not well with Aunt Petunia’s favorite nephew, Benjamin J. Grimm, and beyond that, he may be harboring a huge secret guilt! What will this side-trip reveal, and how will it affect the Fantastic Four? Only Matt Fraction and Mark Bagley (well…maybe Kelly Sue DeConnick?) know!” 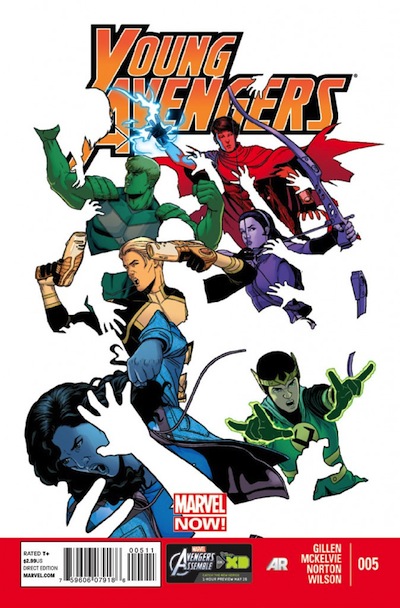 Marvel says: “The book where when a character says “I did it half an hour ago” normally means doing “it” half an hour ago reaches its first epic conclusion. Why Did Loki Do It? No one kno… okay, we’ll tell you…Well, part of it. Miss America probably punches someone. She usually does.”

Joey Braccino says: “Read this comic if you want to be awesome.”

Mara Whiteside say: “I was a skeptic of the series, but it won my heart with the Tumblr parody recap. I believe that pretty much sums up how hilarious and culturally relevant this series is.”