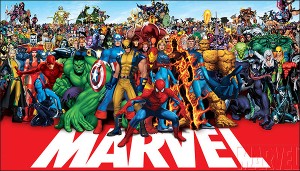 After the frankly stunning success of Marvel Studios’ “Phase 1” – the studio’s term for the slate of pictures that began with the release of Iron Man in 2008 and culminated in the veritable geek-orgy that was The Avengers – Marvel’s Iron Man 3 officially ushered in “Phase 2,” a slate that will also include Thor: The Dark World, Captain America: The Winter Soldier, The Guardians of the Galaxy, and The Avengers 2: The New Batch (here they grow again!).

Now that “Phase 2” has been thoroughly defined, fans and journalists are clamoring for more information on the studio’s future plans like the frighteningly ravenous beasts we are. In a recent interview with Entertainment Weekly, Marvel Studios President and major domo Kevin Feige acquiesced to our collective, Galactus-like hunger by discussing some of the initial, tentative plans for the Marvel Movie Universe in “Phase 3” and beyond. He confirmed again that Edgar Wright’s long-in-the-works Ant-Man would be the first of the “Phase 3” pack, debuting in November of 2015, confirmed that he’d like to do Iron Man 4 (and who wouldn’t, given the ludicrous sums of money that 3 has made – though whether that film will star Robert Downey, Jr. is up in the air), and further confirmed that they are developing (yet another) solo HULK film, although from the sound of it they haven’t gotten very far (“We’re talking about it,” said Feige, “We’re excited to sit down and go, “What is a stand-alone HULK movie?”).

Other films apparently up for contention in “Phase 3” and beyond include Doctor Strange, The Inhumans, and Runaways, all of which feature decidedly weird, and often mystical, elements absent from the Marvel Universe so far. Depending on who you listen to, Marvel is already investigating casting for Doctor Strange, with Iron Man scribe Justin Theroux rumored to be a possible pick to play the titular arrogant-surgeon-turned-Master-of-the-Mystic Arts. Feige seems similarly enthused about the prospect of an Inhumans film, though his comments suggest that it’s more a dream than a plan at this stage. Similarly, there don’t seem to be any plans to move forward on a feature version of Runaways, which is a little baffling, but hey. Feige also addressed the return of characters Daredevil, Blade, Punisher and Ghost Rider to the Marvel Studios fold after the rights to the characters lapsed at other studios, acknowledging that Marvel can now use the characters, but seemingly downplaying any intention to do so at this time.

One character name was notably absent in Feige’s comments, though not absent from EW’s coverage? Black Panther. The character – a kind of sci-fi African amalgam of Edgar Rice Burroughs, James Bond and Batman – had been rumored to be a part of “Phase 2,” but did not end up with a solo film to call his own. No further word on whether “Phase 3” will bring T’challa to the Marvel Movie Universe.

All in all, there’s not much here that wasn’t already floating around somewhere in the internet ether, but EW’s done a nice job of corralling all this info in one place for those of us who feel compelled to stalk about the web seeking out tidbits like the good little addicts that we are.