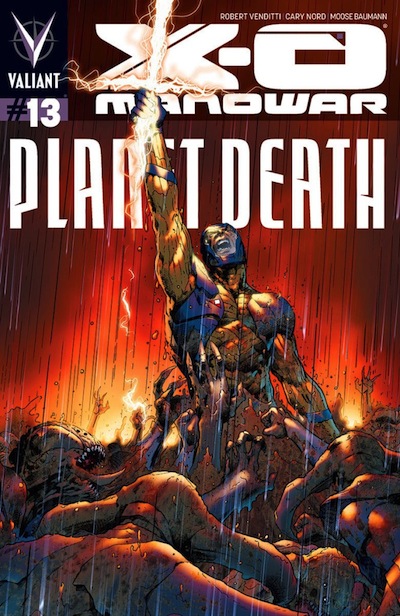 This month’s issue of X-O Manowar puts the death in the “Planet Death” event. We’ve seen death and destruction since the start of the event, but nothing at the levels you would expect for an event one would assume has death encompassing an entire planet.

It was nice to see Aric interacting with some of the enslaved Visigoth on the Vine home world of Loam. He’s never forgotten his hatred of the Vine for his enslavement, but he was reminded of his people and all the death they faced, even before the Vine. He is a leader, and he has a duty to protect and keep them free from oppressors.

Throughout the series Venditti has been including short flashbacks to Aric’s life with the Visigoth on Earth before he was captured and taken into space. There are parallels between Aric’s own struggles against the Romans (and later the Vine), and the origins of the Shanhara armor. Even though he is fueled by it, Aric is not a simple agent of revenge. Aric represents the man that will not give up. He brings hope to others that are oppressed, and he will lead them to overcome their captors, just like the original wearer of the X-O Manowar armor did to free the Vine from their oppression.

There is simplicity and detail in Nord’s art that parallels the story being told. You could easily read through this quickly and view it all as a simpler tale of revenge and standing against those that would bring you and yours harm. Nord’s art has that simplicity that allows you to read through an issue of X-O Manowar quickly. There are levels of detail there, but you have to stop for a second to see them, much like you would need to stop and look at the parallels of past and present events.  It’s one of the many reasons I love this book. I can either cruise through the book and enjoy explosions, or take a finer look at the intricacies of the art and story.

Buy It. X-O Manowar continues to show that is a book that can be enjoyed both by casual readers and those looking for depth in their comics. With three more issues left to go, it looks like “Planet Death” is now in full swing. I hope I never piss off a Visigoth, because there will be hell to pay for sure.