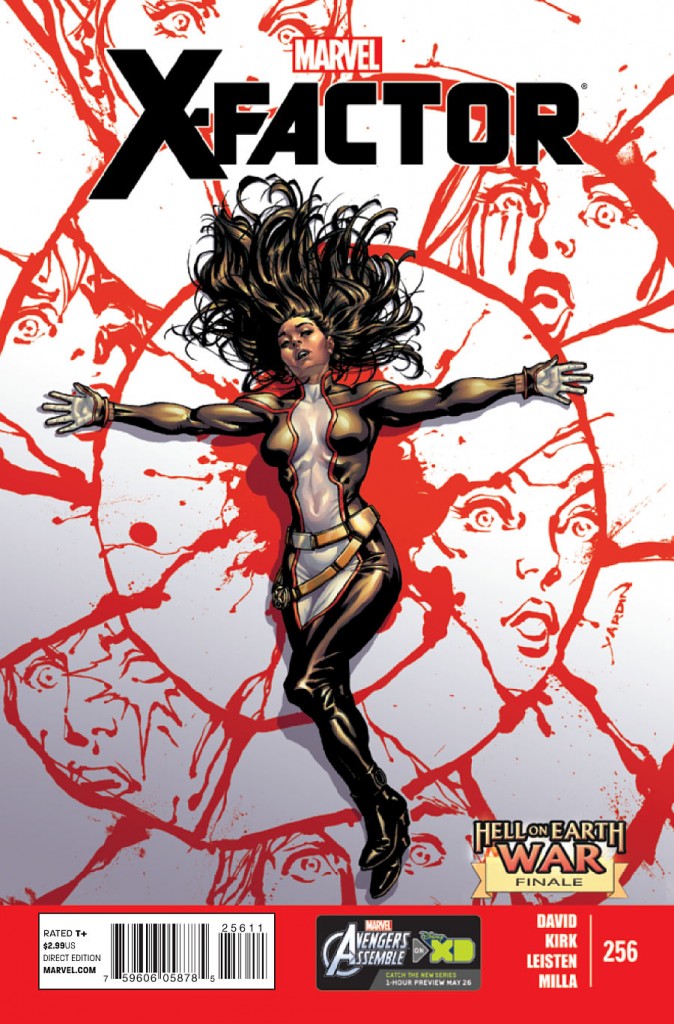 Cover of the week in my book.

Peter David’s “Hell on Earth War” comes to a knock-down, drag-out brawl of a conclusion, complete with twists and turns and an absolutely shocking final page. X-Factor #256 takes a decidedly more action-packed pace than is typically the custom for the series, and the final result is an intense and fitting finale to one of the best “event” storylines in comics in a long time.

So many things happen in this issue, from apparent deaths to multiple multi-colored explosions to one hell of a cliffhanger ending.

Peter David has built to the climactic moments in this finale for the last 2 years worth of X-Factor issues. Everything from Tier’s birth to Guido’s resurrection to the introduction of Mephisto’s daughter, Jezebel, to Layla and Jamie’s marriage to Rictor and ‘Star’s relationship comes into play here. The only person that is conspicuously absent is Theresa Cassidy, who’s currently off serving as the mystical Irish banshee Morrigan. Taking her place is Polaris, who takes on the brunt of the superheroics this issue while Monet is… well… after issue #254… dead. David’s grasp of these characters is uncanny, and the events of this issue suggest a finality to the series that hasn’t been felt yet.**

**It was recently announced that X-Factor will indeed after this summer. It would seem that David is entering that denouement with this issue.

Despite that long history, this finale reads fairly easily. The combination of Tier’s expository narration and the relative self-containment of the story’s action makes for an accessible read for new readers. Yes, so many things happen, but David’s masterful storytelling hits each and every emotional beat perfectly. Issue #256 has no time for quips or pop culture; instead, it’s serious-business time as X-Factor battles to save the Earth from Hell.

Leonard Kirk is in fine form for this final issue. The linework perfectly balances the superheroic elements with the horror/supernatural settings. There are some confusing panels during one character’s “death,” but this is due more to the perspective and used than the lines themselves. Matt Milla and Jay Leisten compliment Kirk’s pencils well, covering everything from shadowy silhouettes to fiery explosions.

Buy. And the reasons for my original “What. The. Hell?” Three-fold. First, so many things! I want to talk about all of the twists and turns in this issue, but I want you to read the book first. So buy it and read it and enjoy one of the climactic final issues I’ve read in a long time. Second, three characters are comic-book-killed in this issue, and I desperately need to know what happens to them and to their friends. This speaks to Peter David’s deft characterization and storytelling. I care a lot. Third, I really don’t want this series to end. “Hell on Earth” has been one of the best comic events on the stands, and while this final issue is an effective resolution and suggests a long denouement of consequences, it also reminded me just why I love X-Factor so very much.