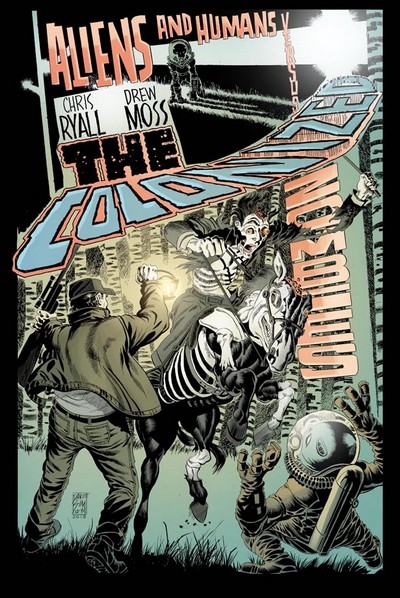 Carbon Falls Collective is a separatist community in rural Montana. The death of their leader recently left his son in a position to take over, but some of the town ‘old boys’ aren’t keen on his commitment to green living  over weapons accumulation and bravado. The community is headed for civil unrest when an alien ship crashes in to a hillside, not only making first contact with the quarreling civilians but inducing a zombie outbreak with their dysfunctional space technology.

As Huxley, the new town leader, figures out that their dead are rising and attacking the living and that the alien visitors are to blame for it, he attempts to learn about their mission to earth and work out a plan to stop the zombies. Randy Roy, Hux’s most vocal opponent, come to his own conclusions: the aliens should be shot dead and Hux must be in alliance with them, ready to sell out the town. While the brains and the brute continue to battle over how to handle the crisis, a government official who’s been cut off from communication with his department is creeping around, hoping to find an illegal arsenal and is witness to the invaders and the flesh munchers.

While Huxley accompanies the aliens back to their ship in hopes that they have some technology that can save his town from the zombies, the problem is growing hungrier and larger.

This story is silly. It’s goofy, it’s gory and it’s pretty ridiculous. But it’s so much fun. Don’t expect anything deeper than a plot which supports the old ‘and then everything went wrong’ routine from The Colonized and you won’t be disappointed. The art is colorful and appropriately toonish. I normally prefer my horror books with a sharper edge, but this one is entertaining the hell out of me.

Verdict: Read this. Whether you choose to buy it in print or just read it digitally depends on how serious you are about your collection, but I feel like The Colonized is well worth following just for some lighthearted, easy fun. Aliens and zombies make for a definitively strange mix but the writing is good enough to keep things suspenseful and creepy. So, read it!