Hey, folks! I know we are nearly a week into May, and I am just getting the April round-up to you. I apologize for that. There were a few factors as to the delay, but I’m not going to bore you with it.

Instead, I’m thinking on changing up the format this month. I have been writing up recaps for each Valiant release, but this time around I am going to focus on the stand out series for the month, anything that shatters the status-quo, and general Valiant news. 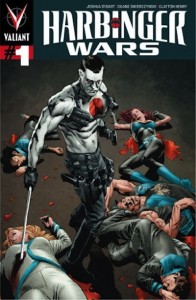 Valiant’s first big crossover event started in April. The event is featured in issues of Bloodshot, Harbinger, and the aptly named Harbinger Wars.

I am very impressed with how Valiant is handling this event. Harbinger Wars sets up the event in a fun, well-paced opening issue. It’s only the first issue, but other publishers could take some notes on setting up fun and engaging crossover events. Also, you are getting almost 30 pages for your four bucks (*cough*cough* Marvel). If you are looking for some badassery to keep to entertained, look no further than Harbinger Wars.

Harbinger Wars is certainly where a majority of the major action is happening. The other series are playing a more supporting role to the overall tie-in; a strong supporting role that adds more overall depth and scope to events in the Valiant universe. If your wallet is hurting or looking dry, pick up the mini-series. 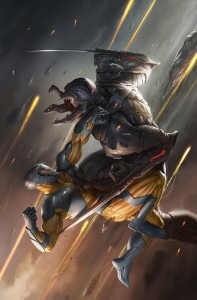 Valiant’s other big, although self-contained, event is still going on in X-O Manowar. I went into the event expecting massive death and destruction along the lines of a summer blockbuster, and there has been some of that. The lack action hasn’t been a negative yet, as Robert Venditti has been doing a lot of world building to really add some much needed depth to the Valiant universe. (Hmm. I’m seeing some themes here in Valiant’s events.)

Aric is now without the armor, but perhaps like another early summer blockbuster, you got to take the man out of the suit to show that he can be badass without it.

Oh, that awesome pic accompanying this segment — Valiant is working with Quarantine studios to release that as a deluxe statue. Umm… Yes, please! It will be made of polyresin, stand 14 inches high, and should release in 2014.

Ok, technically the Harbinger Wars: Battle for Las Vegas free app launched on May 2nd. Close enough. I’m working off the lunar cycle or something. The app is made to be a tie-in that follows the story of the events going on in the Harbinger Wars event.

I really like what the Valiant universe has to offer, and although this app is free, I just can’t dig it. The controls felt a little clunky, and the virtual D-pad didn’t feel as responsive as in other apps. On the flip side it is a free app, and aiming to grab some casual game players into the world of comics, so I can’t knock it too hard.

You can play as Bloodshot from the get go, but other characters are unlocked with in-app purchases. Unfortunately, I don’t think I’ll be exploring any of the later add-ons. (They are free and should release with issues of Harbinger Wars.) I did say it was free, so download it on your iOS or Android device and make you own opinions. I’m just the kind of guy that would prefer to pay three to five bucks and get a polished app with no IAP. 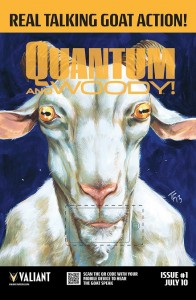 Another piece of news from May (1st!), but I have to mention it. There will be a talking goat variant for Quantum and Woody #1. The talking is done, cleverly, by scanning a QR code off the cover and then placing the phone on the cover over the goat’s mouth as a video plays. Will we be seeing Jim Breuer return to his role as Goat Boy?

Hell, I’m a digital reader, but I’ll be pre-ordering a physical copy of this variant.