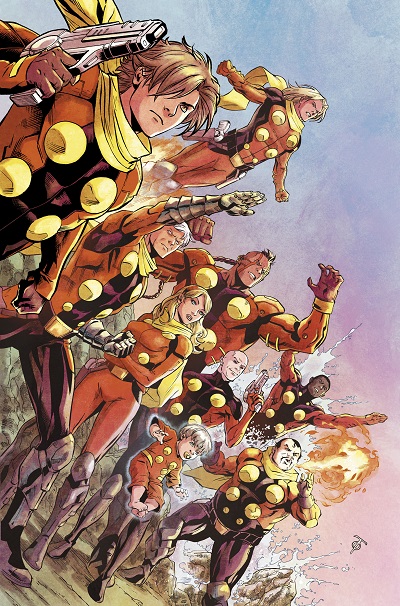 There has been a big push of late in all forms of media to reintroduce classic properties that have stood the test of time to today’s audience, and comics is by no means exempt from this.  But Archaia is looking to take this one step further this summer by releasing a full graphic novel edition this July of a newly westernized reinterpretation of the Japanese manga classic, Cyborg 009.  Archaia believes in this content so much that they even released a $1 preview chapter this week entitled Cyborg 009: Chapter 000; and frankly, as a fan of the source material, I can easily see why they are so confident.

Created in 1964 by the legendary Shotaro Ishinomori, godfather of such pop culture phenoms as the Power Rangers and Kamen Rider, Cyborg 009 follows the adventures of the recently altered title character who was abducted and forced to become a weaponized cyborg by the evil Black Ghost Organization.  The ninth iteration of their new militaristic technology, Cyborg 009 finds himself caught up in conflict and intrigue when the eight previous models rebel against their corporate overlords in a desperate bid for freedom.  Frantically trying to remember his human past, torn between a soul and programming, and thrust onto the original Japanese super-team of cybernetic heroes who struggle to find their own lives once more (including a cyborg baby for pete’s sake!); this is Cyborg 009.

With almost 50 years of manga, movies, radio plays, and anime circling the Cyborg 009 mythos, it can be a very daunting property to dip your toe into.  But it appears this first offering from Archaia is washing away a lot of that and starting anew, while manipulating the storytelling to make it a little more palatable to the western audience.  Now I am far (let me stress FAR) from a manga traditionalist, but even still, I am usually a bit apprehensive about a western reboot of any overseas properties (see the rumors surrounding the now dead in the water Hollywood Akira movie for plenty of justification for this).  Luckily for all involved though, after reading this initial chapter it is clearly evident that both DeSanto and Camp absolutely adore the source material, and more importantly, are aware of the changing environment to a degree that they know what tweaks are needed to adjust the storytelling process to one more comfortable to the new western audience without losing the core themes or feel of the original tale being told.  There is a level of camp that was always there from the beginning (again, there is a cyborg baby people), but beneath that veneer is a deep and tragic tale of humanity lost and regained set against a backdrop of large scale battles and political intrigue that should keep any level of reader satisfied.

Where the real stylistic challenges usually arise in these types of endeavors is in the artwork, but Marcus To has stepped up to provide an absolutely beautiful rendition of these classic characters.  Keeping a healthy heaping of manga influence, the characters have all been streamlined a bit to add some personality to their uniform look, while still holding as close to the original designs as they possibly can.  The action is fast paced and fun, and there is a surprising amount of empathy that the characters display during conversations that could be easily lost in the effort to modernize these individuals.  Even more impressive, the color work by Ian Herring is bright, vibrant, and works to bring a feeling of updated classic to the artwork present with its washed out tones practically on its own.  I stress again, not a traditionalist here, but after years of reading the original material in black and white it is a very Wizard of Oz moment whenever I see color work such as this applied to these properties.

Give it a try!  It’s a $1 preview chapter that will easily let you know if it is a title for you without much invested on your part.  There is a reason this property has lasted as long as it has, and the creators of this version have their fingers on the pulse of exactly why that is.  Engaging in the long form, amusing in snippets, and downright fun overall; if you have ever wanted to try your hand at a manga property, this would be a great beginning step.

The entire Cyborg 009 Graphic Novel will be released on July 19’th by Archaia Entertainment.