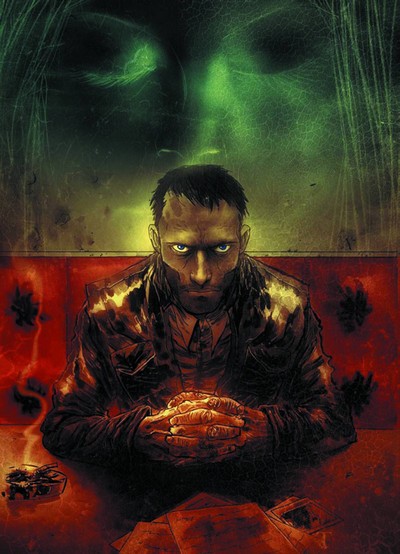 Joe Fitzgerald was a hit man who fell in love and wanted to get out of the business for good, start over. He promised Laura he would only do one more job. That one last job turned out to be the death of them both. When Joe was dying on the floor, inches from the already passed love of his life, an angel came to him and explained that he and Laura would be going to different places and he will never see her again. The only way to change that would be if Joe agreed to work for a new boss, repeatedly dying and returning to life in order to carry out jobs. His reward would be that each time he died for a righteous cause he would be allowed to spend five minutes with Laura. So, this is the new story of Joe Fitzgerald. He’s still an enforcer but he answers to a much higher power and death is no longer a permanent end for him.

Ten Grand opens up with Joe meeting a young lady in a sketchy bar to get info on a possible job. The neighborhood knows him and folks who are looking for the kind of enforcing that Joe does are pointed in his direction. The girl explains that her sister has been lured in to some kind of cult by a creep and she wants Joe to get the guy away from her family. When she hands over the picture, Joe is shocked to see the face of the last man he hunted down before his and Laura’s death. The problem is, Joe killed the guy already.

The first issue of this new series is loaded with story. It tells the history of Joe Fitzgerald and his pain. It tells the present day journey of Joe and the heartache he lives (and dies) with over and over. And before issue #1 is over, it presents lots of questions to keep you waiting anxiously for the next book. Who is this ‘angel’ that Joe reports to and who does she really represent? How is it possible that Joe’s last victim is living and breathing again? How long can Joe go on dying and coming back? The artwork is, of course, fantastic. This is Ben Templesmith we’re talking about. His artistic style paired with some really great story telling makes Ten Grand a perfectly spooky and satisfying read.

Verdict: Buy this. This series is the complete package of gritty backdrop and dense story. The vibe reminds me of one of my favorite Templesmith series, Fell. I’m super excited about Ten Grand and I hope you enjoy it just as much.