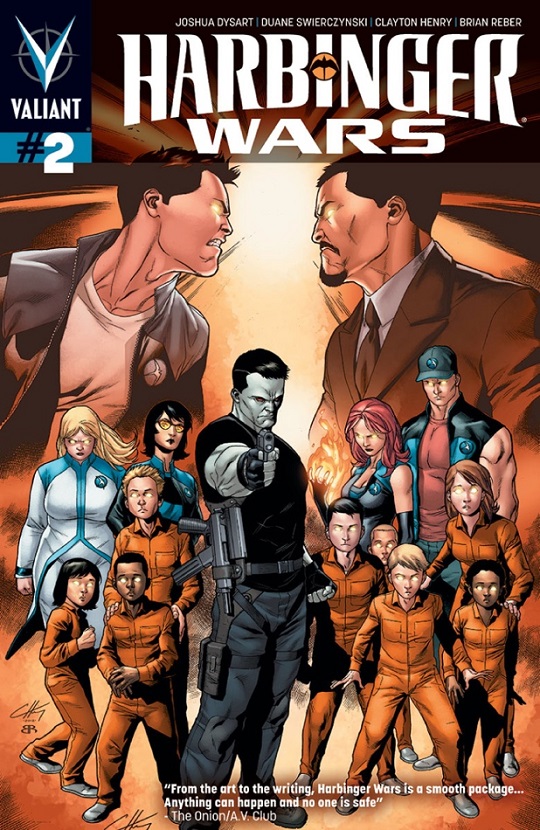 The opening of issue of Harbinger Wars had its fair share of action and destruction, and did a nice job of arranging all of the pieces on the board. Issue #2 is shaking that board up and moving all the pieces violently towards Las Vegas.

Harbinger Wars #2 delivers the heavy action and destruction needed to make this feel like a summer blockbuster. A large majority of the issue focuses on the showdown between Bloodshot and Harada. Unbeknownst to Bloodshot, his Project Rising Spirit creators equipped his nanites with special abilities that activate upon positive facial recognition of Toyo Harada. The resulting duel shows off some pretty wicked and semi-disgusting panels throughout the fight.

Henry and Perez do some magnificent art this issue, but Brian Reber brings it to life with his colors. If you’re a digital reader, you get a few uncolored pages at the end of each Valiant comic. It really gives you an understanding of just how much the colorist contributes to the book, and without Reber a lot of that gore wouldn’t come through.

Dysart also spends time focusing on the other group of runaway PRS psyiots, Generation Zero. Unlike The Renegades and Bloodshots group, they don’t have their own series, so it was nice to get a little more time with these characters.

Stanchek and his crew don’t feature in this issue, but that isn’t really a problem for me. I’m glad that Dysart concentrated the issue primarily on two larger events. Things should also be ramping up with the H.A.R.D. Corps busting in next issue.

Buy it. Harbinger Wars #2 was pretty amaze-balls. Valiant has been marketing this as a huge summer event, and it is living up to all their hype.