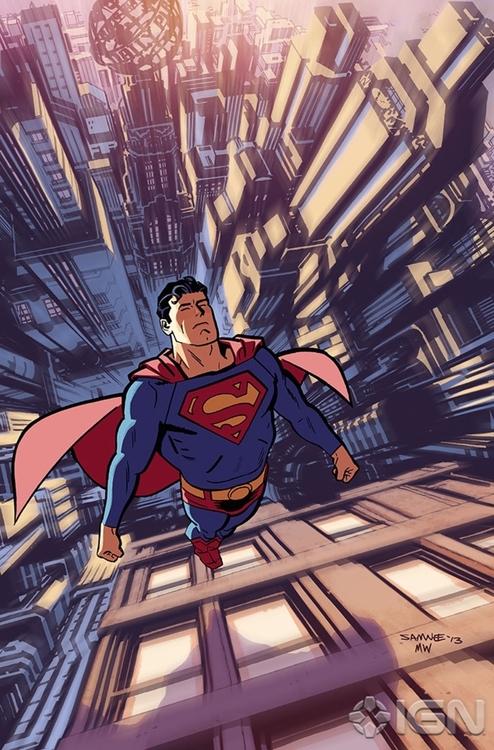 When Adventures of Superman was first announced a few months back the internet was buzzing with anticipation. The series follows in the same vein as another DC digital first series, The Legends of the Dark Knight. Both series offer continuity free stories from a variety of artist and writers, often changing with each week’s release. The issues are 99 cents and give you the equivalent of ten print pages of comics.

This week saw the first digital issue from Jeff Parker and Chris Samnee. The story showcases an average meth using vagrant that has unexpectedly developed mentals powers while suffering from a nervous breakdown. Superman has plenty of powers he could use to end the man’s rampage and put a quick end the problem.

What Parker and Samnee show us is that one of Superman’s greatest powers is his willingness to help anyone and everyone, including the “villains.” He believes in people and lends his strength to help them overcome their struggles. In only a few pages, Samnee and Parker are able to encapsulate who Superman is and what he stands for. This is quite a feat if you consider that going on almost two years in the New 52, we’ve yet to get a Superman story that gets to the core of who he is.

I grew up reading old Silver Age stories of Superman and Superboy, so I felt the overall tone from the story and the art reminded very much of some classic Superman tales. While a little more mature and not as “kiddy” I was also reminded of Superman Family Adventures.

If the first issue of Adventures of Superman is any indication with how the rest of the series may turn out, then I am on board. The teams will change, but we’ll get to see just what Superman means to a lot of different creators out there.

If you got a means to read digital comics, than by all means give it a look! Samnee and Parker pay homage to classic Superman stories, by giving us a very solid, short story showing us who Superman is to them.

Issues release Mondays on Comixology, so it’s a great way to tide over the hunger for new comics.