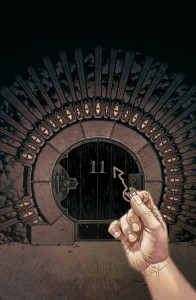 Locke & Key is one of the best comic books on the stands right now. This isn’t hyperbole. Over the past several years writer Joe Hill, artist Gabriel Rodriguez, colorist Jay Fotos and letterer/designer Robbie Robbing have spun a powerfully imaginative and emotionally involving multi-generational saga of dark magic, family secrets, teenage angst, adult regret, selfless sacrifice, and selfish desire. For the past several months that creative team has been slowly, mercilessly drawing the curtains to a close on their story in the pages of Locke & Key: Omega.

It had formerly been reported that Locke & Key would end at the conclusion of Omega. Luckily, readers will be getting some extra bang for their bucks as IDW Publishing has announced that the series will now conclude with two oversize, 48 page issues comprising a final mini-arc entitled Alpha. Comic Book Resources has the details, as well as an interesting interview with series artist Gabriel Rodriguez.

Fans of the book, you may begin salivating. Those of you who haven’t yet had the pleasure of entering Keyhouse are urged to do so forthwith. I sincerely doubt that you’ll regret the decision.