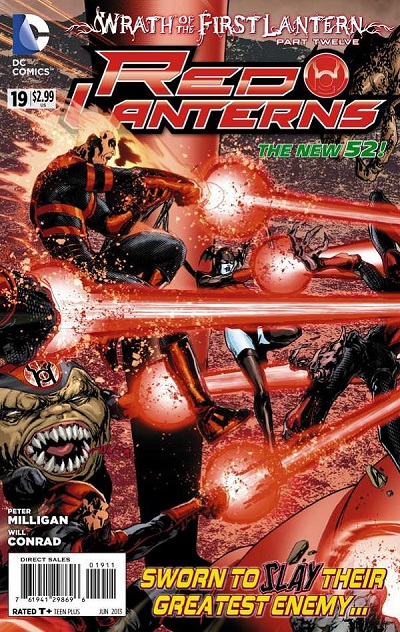 As I have stated time and again, Red Lanterns is an outcast within the ranks of its own family, and that trend continues here in Red Lanterns #19 as it comes closer to its end in both Milligan’s run, as well as its part in the Wrath of the First Lantern crossover.  Placing the overarching storyline on the back burner and focusing on its own internal story elements that have been brewing since the beginning, this issue finally starts to bring the Red Corps together into a cohesive unit, gives them their own antagonists that are tied into the mythos and history of their organization to fight against, and completes the route that Milligan started on to bring these characters from feral beasts into a singular team.  All in all, a fair bit of heavy lifting, but the big question that you want to know is, “Is it any good?”  And to that, I have some mixed feelings (but no rage!).

Having given his Corps a sense of purpose to unite them in their mission, Atrocitus now must pay the cost for his actions both past and present in his never-ending quest for vengeance.  After releasing his army from their mindless rage and allowing them to regain a sense of self, will the members of the Red Lantern Corps follow the orders given to them by their leader even if they contradict rational thought?  Or is this the time for a new direction that these Corps members will decide for themselves?  Meanwhile, an ancient enemy awakens, an old foe shows surprising concern, and Rankorr (the Red Lantern of Earth) struggles to find his way in this bizarre world he has been thrust into.

I will start off by saying, if you are buying this issue specifically for the Wrath of the First Lantern tie-in, you may be a little sore with your purchase decision.  The final page being the only item of any real relevance, this issue instead brings everything Milligan has worked on these last 19 issues to a head in his vision to transform this admittedly one-note Corps into a collection of characters with unique personalities.  And in that regard, Milligan’s strongest tool in accomplishing this task over the run is one of his weakest in this particular issue; and that is a manner of pace.  There has been a steady story-driven cadence as these characters have gone through their paces, and this chapter feels like a sudden spurt that brings the title into a new status quo as it marches into the Wrath finale; which feels slightly at odds with the meticulous manner it has taken all along.  Unfortunately, another casualty in this acceleration is the dialog, which suffers from a few stilted moments as the issue tries to cram everything in before the run comes to a close.

This is not to say that the issue is without merit.  There are a few scenes that offer very intriguing directions for the Corps to take in the upcoming months, and creates an organization that can offer more than its fair share of internal strife as well to keep the title rich in conflict.  Rankorr’s divided needs for both companionship, normalcy, and revenge also has the potential to create a compelling character in the long run as those seeds are tended to in this issue.

The artwork provided by Will Conrad is a lot cleaner than his predecessor, but sadly misses out on a lot of the subtle manipulations of shadow that Sepulveda utilized to provide emotion to characters that essentially only have one facial expression.  Seeing how this chapter hinges on the emotional realizations of the members of the Corps, it is something that stands out more than it would have normally, but it is certainly an item I sorely missed reading through this issue.  Where Conrad does bring his own flair in though, is the detailed nature in which he draws the various alien characters that comprise the Red Lantern Corps.  Each is unique, detailed to a level rarely seen in the title to date, and give a strong sense of individual personality to each member depicted.

I am actually going to give this issue a buy if you have been following Red Lanterns, but a pass if you are curious for its role in the big crossover.  It stays true to the driving force behind the title, points the title in a definitive direction for moving forward once the Wrath event is over, and defines the role various characters are going to take in the new status quo.  But walking in blind, or reading it specifically to see its place in the larger tapestry, will more than likely frustrate readers more than draw them in at this particular point as it lurches through the checkpoints it needs to wrap up plot threads before this run comes to a close.

Chapter 12: Red Lanterns #19 – If you’ve picked up the last three, this one is a buy.  As a chapter in the crossover series, it does not have much relevance though.