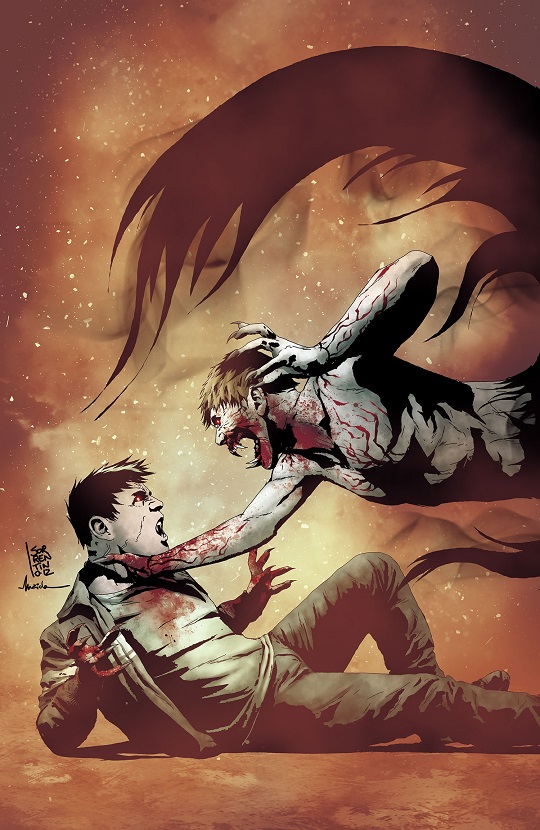 *Warning! Spoilers within! Thou hath been warned…

If you came to this book looking for twilight and sparkles, then you were in the wrong place. There are neither Little Ponies nor lame vampires to be found among I, Vampire. Over the series’ twenty issue run we’ve seen the gruesome destruction of many monsters and men. (Issue #0 stands out as a personal favorite.)

The final entry into I, Vampire serves as a proper send off to the series, and makes several nods to itself and its readers. In fact, there is a very meta feel to this issue. Fialkov is aware of his readers’ concerns and does a very decent job of addressing them.  It’s a tad difficult to describe my feelings exactly, but it feels as though I had just read a letter from a friend that was departing. As I run outside to try and stop them, I see them standing at the corner. I stop and smile. They tip their hat, smile, and turn the corner to set off on their own adventures. We may meet again, but if we don’t, our time together was memorable.

Since DC announced the cancellation of I, Vampire, events have felt like they were being rushed to fall into place before the final issue. I’ve felt that the increased pacing has also leant to some slight confusion as to what is going on. The death and sudden reappearance of Mary as well as the resurrection of Lilith all in the final pages of issue #18 left a very, “wait, what the flip is going on?” taste in my mouth.

I’m sure there are some other readers that were with me on this. On page two was Fialkov’s first little moment (two actually) of meta-ness. One of Andrew’s recent recruits asks, “What the hell is going on?” Yes, indeed! What the hell is going on? Oh! Mary is back and she explains it all. Oh great, let me guess. She’s probably got some new mojo, and she’s here to just end all of this, right?

I was halfway through a sigh when I read what Cain had to say. “And what are you? Deus ex machina?” Thank you for that, Fialkov. It seems to me that this might be his way of letting us know that this isn’t necessarily how he wanted it to play out. Instead he was forced to wrap everything up quickly with little mess left over. I also kind of see it as jab at DC editorial, and I’m wondering if anyone else sees it that way.

Despite having to rush the story and bring about a quick solution, Fialkov was able to bring the entire story full circle. We are given several pages that focus on Andrew and Mary’s past. After Andrew was turned he disappeared. His father blamed Mary and proceeded to force himself onto her. Upon his return Andrew turned Mary into a vampire, but after the torment inflicted on her by his father, she could never go back to who she was. Andrew was able to deal with his change and got to come back. It’s a cycle we’ve seen throughout the series, but it’s a nice little thread that thematically ties everything together.

It was also great to see Andrea Sorrentino return to do some art. Sorrentino provided the art for all of the flashback pages, and it was fitting to see the series original artist’s contributions help to sell that everything was brought full circle.

Overall, I thoroughly enjoyed the issue. Even though I, Vampire is a dark title, it had its moments of humor and wit. It hits the beats and kept going from the start right until the end. Of course, it would have been nice to see things play out over a few extra issues, but given what he had to work with, Fialkov was able to tie up the major plot threads.

It’s not a perfect analogy, but I see I, Vampire as that pretty rad gift your friend put a lot of thought into when picking it out for you. Unfortunately they spent too much time picking out, and had to grab the nearest wrapping paper to wrap it up. They did find a nice bow though. Your friend made a comment like, “I know it’s your birthday, but all I had was Christmas paper.” We don’t mind, because what was inside was pretty damn good, and something we can always enjoy.