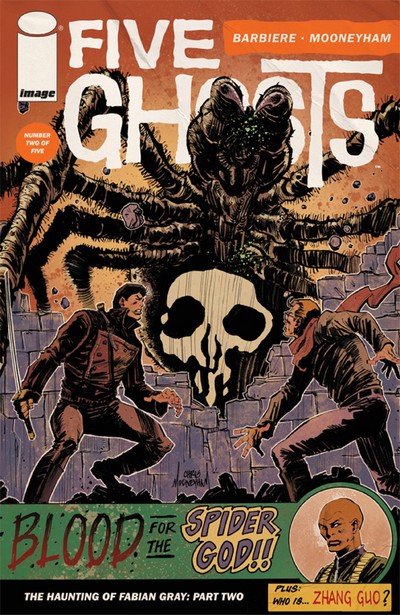 Treasure hunter Fabian Gray is possessed by five literary ghosts after an encounter with an artifact called The Dreamstone.  The spirits who inhabit his body have been taking a toll on Fabian’s physical and mental well being. His sister is in a coma of some sort, a result of an adventure gone wrong that Fabian is committed to making right. There are devilish warlocks on the hunt for him, hoping to steal the power that the Dreamstone gifted him. There is a lot going on in this series, so you’ve got to pay attention.

Issue #2 picks up with our charming treasure hunter and his best pal tied to an alter, about to be sacrificed to the Spider God. A tribe of worshipers fill the ancient hall, chanting a call to the spider to come and eat. Fabian has been feeling drained of his power and fell in to a sleep filled with dream memories. As he wakes and realizes their lives are in danger, something he can’t identify connects to him and re-energizes the ghostly powers to allow him escape.

As they fight their way out of the spider filled temple, a skilled stranger appears to help them. He seems to not only possess the mysterious object that ignited Fabian’s powers but also to understand him. This issue ends without revealing the stranger’s identity, or where he is taking the adventurers.

Verdict: Buy it. I like this series so far and it’s strangely difficult to explain why. The story is packed with adventure and mysterious characters. It can be silly at times, but it works like a dirty joke in a Bond film. The art is nice, but not amazing. It does seem to capture a certain ‘retro’ feel for the story that I find pleasing. I think the best I can summarize Five Ghosts is it’s a dark, violent mix of Indiana Jones and James Bond.