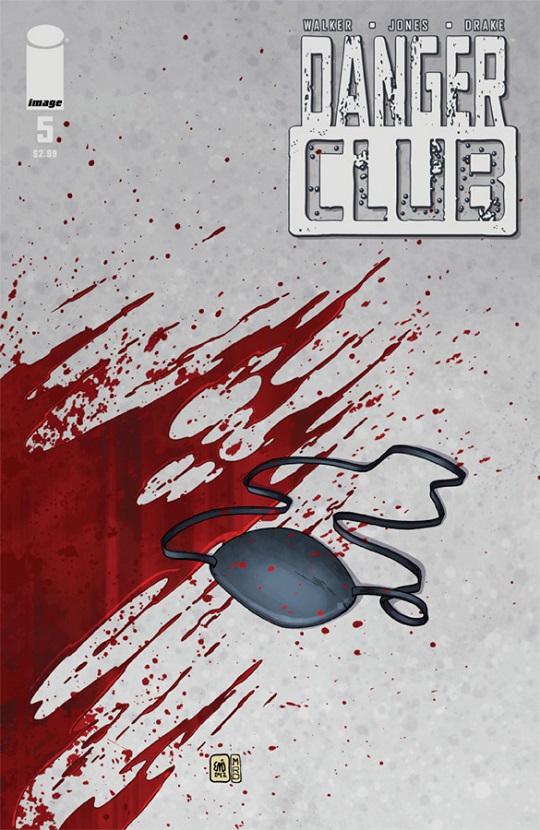 After a fairly long hiatus, Danger Club is back in action. The hiatus wasn’t due to any publishing or artistic delays, but stems from some personal tragedy in the lives of one of the creators. Everything appears to be relatively back to normal for them, so that is a blessing.

The series is a loose mirror of modern superhero universes like DC and Marvel. You’ll see a lot of characters that have analogies in the big two’s books. That doesn’t really bother me, because what we get to see is a somewhat grittier and more violent comic than what either Marvel or DC would usually put out.

Even the initial premise of the book pokes fun at many past superhero events. All of Earth’s hero leave to fight some big intergalactic threat. Well what if they all died? All you got left are the sidekicks that are still on Earth. This isn’t a book in the vein of Teen Titans, though. It’s incredibly more violent, vicious, and bloodier.

Chances are if you were reading this series before, you will be picking up issue #5. The first four issues were quick to get into the thick of things. The story was ramped up pretty high, and culminated in a fairly spectacular cliffhanger. There were reveals in issue #4 that put DC gatefold WTF covers to shame. Admittedly, not that hard of a thing to do, but let’s not diminish the awesomeness of Danger Club.

Despite the long absence the art is gorgeous. Jones puts in a lot of detail and there is never a dull panel. Characters display incredible depth in their emotions and action as a result of his work. Drake delivers the same awesome, vibrant colors he brought to the show in the first four issues.

I don’t want to comment too much on the story, because I don’t want to spoil the first four issues for anyone thinking to pick up this series. What I will say is that issue #5 continues with a highly paced issue that hits the beats and doesn’t take its foot off the gas. Kid Vigilante had a plan, and the pieces have been falling in to place.

For me, Kid Vigilante is what really pulled me into Danger Club. He is smart, and an incredible detective and planner. Given the circumstances he can be rather ruthless, but he doesn’t take pride in that. Kid Vigilante reminds me of a Tim Drake (pre DC’s New 52) with a slice of Damian Wayne. That makes for a pretty badass lead character.

Kid Vigilante is absent from issue #5, but Walker lets the supporting characters carry the issue rather well. We get to see that these aren’t just the supporting cast. They are all important little badasses.

Give the series a try. Danger Club #5 is a pretty weird issue to jump in on, but if you’ve been keeping up with the series, you’ll enjoy it. With the violence and blood, it is definitely a more mature Teen Titans or Young Avengers kind of book.

Jumping on Point: The back issues are all on Comixology. Issue #1 is free and the others only two bucks. The trade of the first four issues can be found on Amazon for about nine bucks as well.