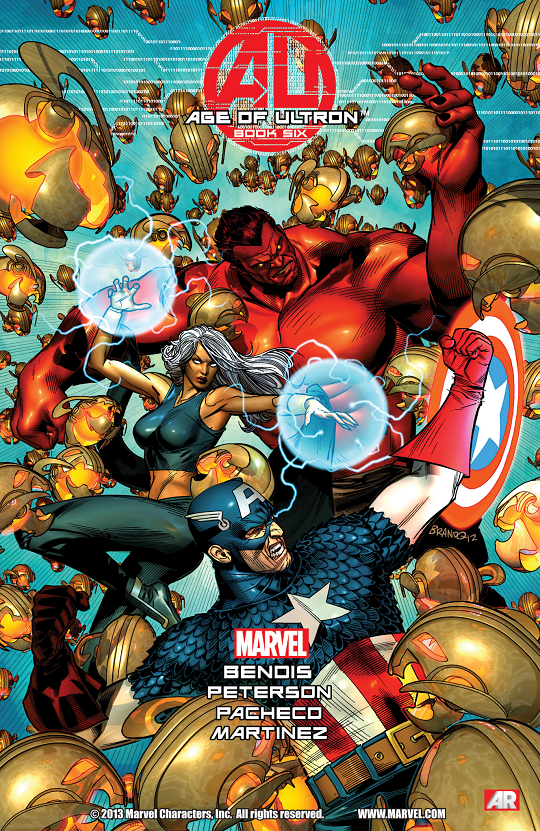 Past: Pencils by Carlos Pacheco; Inks by Roger Martinez; Colors by Jose Villarrubia

Some Issue #5 spoilers in this review.

After what I felt were a few rather uneventful issues, the sixth issue of Age of Ultron seems to be picking things up. Finally. When I sat down to read this issue last night, I had one thing on my mind. This is the last issue I’m buying; why am I still buying this? I’ll admit that’s not a very good attitude to have when you are about to read something you will be reviewing. However, I know I am not alone in feeling that things tapered off since the (awesome) first issue.

I’ll tell you now that this issue surprised me. By the time I had finished reading, I wasn’t thinking about writing a scathing review, because I actually enjoyed it. I enjoyed the back in forth between the team in the future marching towards Ultron, and I enjoyed Wolverine and Sue Storm in the past.*

Wolverine and Sue’s story is the highlight of this issue. Their actions could leave huge ripples throughout the entire event and possibly for the Marvel Universe as a whole. They debate the morality of what they are set out to do, which is to kill Hank Pym before he creates Ultron.** Wolverine sees the issue as black and white. Either they don’t kill him and the world gets destroyed by Ultron, or they kill Hank and save the world. Someone like Captain America also wants to think they see the issue as Black and White, but the truth is they are dealing with all the grey in between. They don’t want to give up hope that an alternative solution can be found.

Do the ends justify the means? What if you fail in your actions and it truly brings about the end? If you want you could really dig in and analyze the decisions being made here. Or if you don’t want to read that much into, then don’t. There is enough action in this issue to make it feel higher-paced than some previous issues. I feel like that this issue has the bigger, more important cliff hangers of the series, in so far as it will have a larger impact on the story.

We also had two art teams this issue, with each one tackling a different time period. I like the team working on the story in the past. It had a very “comics of yesteryears” style to it; a bit of nostalgia, and a nod to the past. You got to love the old Nick Fury and Giant Man costumes!

*It’s a page one “spoiler” that Sue goes back with him. No flipping out, please.
** It was revealed last issue that Wolverine wanted to travel back in time to kill Hank Pym.

If you were like me and were debating whether or not to pick up issue #6 of Age of Ultron, then give this issue a chance. The pace picks up, and the actions of this issue feel like they will be pushing the story forward with large strides. Fans of the series so far should continue to enjoy it.