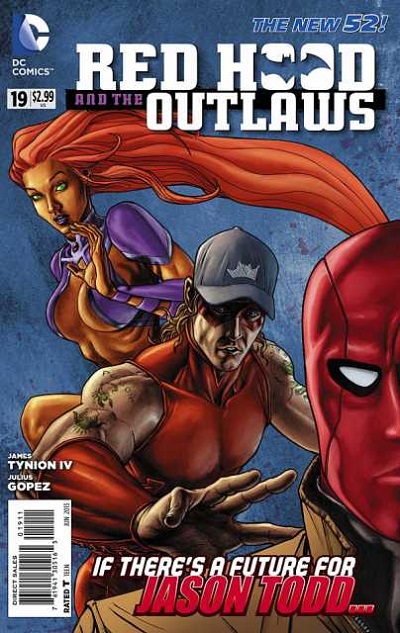 Red Hood and the Outlaws #19

Ah, guilty pleasures.  Red Hood and the Outlaws firmly started out as one of the biggest guilty pleasures of my initial foray into comics after it received so much derision out of the gate.  While there was reason for some feathers to be ruffled, the clamor from that outrage du jour almost drowned out what quickly turned into a fun adventure romp book; with surprising amounts of deep character moments interspersed throughout its zany misadventures.  Much like its central characters, it was flawed, uneven, and sometimes even lacking in its own self-identity; but for myself it was part of the charm to the silly fun that was housed in its pages each month.  As such, I had grown rather attached to Lobdell’s style on the title, and was filled with more than a little worry when it came down the pipe that he was stepping aside.  With the announcement that Tynion would be taking the helm afterwards, some of that trepidation slipped away as I had been enjoying his work in backups and with Talon, but the looming threat that my little fun title may be wildly altered still clung to the back of my head.  And honestly, after reading it, there are quite a few changes for Red Hood and the Outlaws here in his inaugural issue, but happily many are for the better while still keeping the heart of the characters intact.

After last issue took Jason Todd deep within his own psyche, he was forced to come to the realization that he could not move forward in his life while focusing so much on the past.  Leaving his friends Roy Harper and Koriand’r behind, he sets off on his own trail to vanquish these demons that continue to haunt him.  But unwilling to give up on their friend (and being poster children for the word stubborn), the two unlikely lovers pursue him to the ends of the Earth and beyond in an effort to help him on his path.  Can three people from broken pasts help each other heal on their way through the world?  Will Starfire and Arsenal find their lost friend and leader?  And even if they can, what will they find once they do?

Friendship.  It’s really been the central tenet of the title since the beginning and that does not stop here.  Not the idealized super-best-friends angle, but a more grounded look at three broken individuals who find solace and a place to belong when together.  Roy and Kori honestly care about Jason’s well being as much as they do each other; and Jason is willing to sacrifice anything to bury his past once and for all in his effort to stop hurting the people he has grown so close to these last 18 issues.  To my relief, Tynion maintains the spotlight on this wonderful element of the book while also moving the characters forward in their own paths of recovery.  Even more surprising, a lot of the adventure and whimsy that the title has been missing since it was drawn into the morose pit of Batman crossover country is also evident once more, and it is a welcome return to form on top of the progress the overall story is taking.

I’ll admit I am not completely sold on the main plot device that looks to be driving this arc forward, but the manner in which the main players are displayed in this issue will allow me to give it the benefit of the doubt; as the events that happen in the title have always taken a back seat to the bold personalities that are taking part in them.  And that all important facet of the title is something that Tynion shows he can bring in spades with his dialogue in this issue.  It was honestly my biggest concern in a creative shift, and it is one I am happy to report is a non-problem from what is displayed thus far without sacrificing the pathos that the characters have for themselves and one another.  There is admittedly a lot of plates to keep spinning on this title to make it work (fun, close bonds, whimsy, deep character introspection, adventure, and progression), but from this initial effort the Outlaws look to be in safe hands.

The pencils by Gopez are a little on the erratic side this first issue, but there are plenty of moments that he nails spot on to allow me to believe he is just finding his groove with these characters.  His style is much more detailed than the last few issues have been, and call back to the scratchy style that Rocafort brought to the book during his tenure.  It was a style I always appreciated as a match with the rough around the edges personalities that populated the title, and it strikes the right chords more often than it misses by far.  There is an evident focus back on the facial expressions of the characters, which plays out well when properly executed, and brings the humanity (or Tamaranity?) that the title needs to balance the more comedic dialogue that the protagonists often use to mask their emotions.

A happy buy.  I’ll be completely honest, even though I enjoyed a lot of the earlier issues, the series had lost a lot of momentum for me in the last few months, and I was concerned a creative shift in direction would kill it off for me.  Instead, Tynion and Gopez have brought Red Hood and the Outlaws right back up to where it belongs in my pull list; my guilty pleasure that I look forward to each month for my dose of friendship, fun, and whimsical adventure (with a healthy dose of character moments hidden in plain sight).