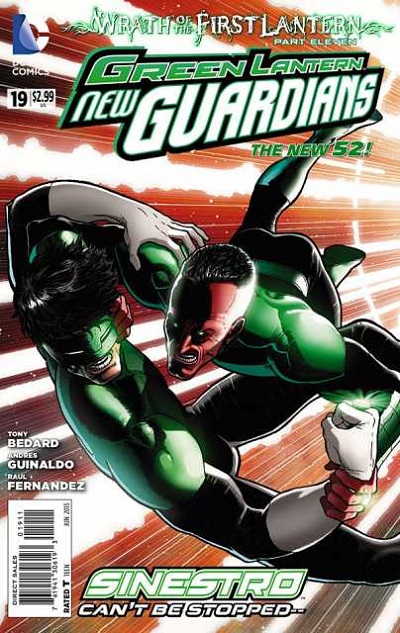 If there is one thing that can be said about events in the Green Lantern corner of the DCU, it’s that once they start moving, they really play off of the momentum of the other titles at an almost exponential rate.  So, once the handbrakes were released and the players were in place after Green Lantern #19, one would naturally assume the entire family of books would start to regain their stride; propelling the storyline towards an increasingly improving and inevitable climax of the final arc in the Johns era.  And while not everyone agrees with my pacing critiques of the First Lantern’s dabbling, I still turned my eye towards Green Lantern: New Guardians #19 this week with a renewed sense of excitement and optimism in light of the recent progression in the storyline; and I am elated to say it is hitting all the right notes to help keep that streak alive.

Tragic events in space sector 1417 have started to bring the errant Lanterns together once more, as Carol Ferris and Kyle Rayner continue their search for the missing Hal Jordan by following their only lead amongst the wreckage and casualties this devastation wrought.  But the lone survivor of these horrific events cannot accept it, and demands the newly-minted White Lantern to do everything he can to reverse the tragedy; even if he has to use force to make him do so.  Who can possibly stand up to a man who has lost everything while wielding the most powerful weapon in the universe?  And what exactly are the limits of the White Lantern of life?

To be completely partial for a moment, this is the type of Green Lantern story that I like.  With a massive cast of strong-willed characters defined by clear (and often opposing) motivations, the stories available by just tossing a bunch of Lanterns in a bucket and allowing them to act naturally almost always come across as the most natural to myself.  Add in a driving force such as the one that occurred in Green Lantern #19, and the tension rises even more to add the epic space opera feeling that these titles should be bringing on a monthly basis.  Sprinkle in a bit of ever-escalating cosmic threats as a backdrop, cook for 4 weeks, and serve to a very pleased Sean.

Needless to say, while this is firmly a character driven chapter in the Wrath of the First Lantern story arc, there is a fair amount of forward progression in the overall crossover as well.  New characters are more firmly integrated, major players are given their direction in the upcoming finale, and a sense of purpose is renewed for people that have felt like secondary actors to me thus far.  While there were one or two lines that felt a little stiff to myself, the dialogue flows very naturally, even with some rather blunt exposition mixed in with it.

Guinaldo’s pencils are probably the most consistent that this particular series has seen in some time, and though I still have a couple issues with facial expressions working around Kyle’s clunky mask, it was vastly less abrasive this issue than it has been since he donned the white.  Action scenes are played out with a clear sense of staging, and the motion is captured in a fun and exciting manner.  I enjoyed some of his work in the earlier issues of Red Lanterns, and it’s good to see him capable of stepping in on these titles with a solid grasp of matching styles.

While it is not perfect, Green Lantern: New Guardians #19 is a giant leap forward in the titles role during this final story arc.  Going back to the basics of playing the strengths and weaknesses of the cast against one another, its faults are easily dismissed by the momentum this issue brings to the storyline overall, as well as its fun interactions with newer characters brought into the mix.  And as the last stop for New Guardians before the finale next month, it is a welcome change in pace to help usher the reader into the last few chapters with the excitement that it deserves.