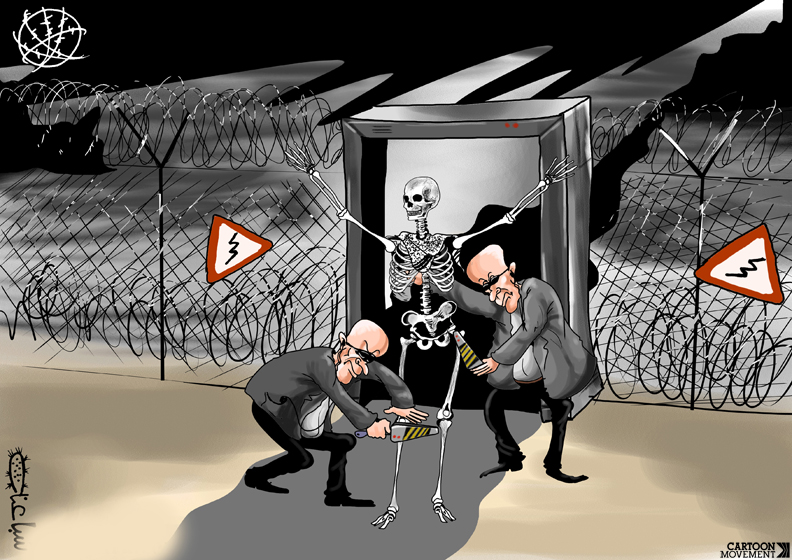 In February of this year Comic Book Resources reported that Palestinian political cartoonist Mohammad Saba’aneh had been arrested by Israeli authorities. CBR quoted a source who said that Saba’aneh was being held for “providing services to unspecified ‘hostile organizations’.”

Since the initial arrest it has been suggested that Saba’aneh was jailed in order to create a “chilling effect” on his speech.

Following publication of that initial story more details on the Saba’aneh case emerged. According to the blog Cartoon Movement, “Mohammad is accused of accepting money in Jordan for his brother Tamer [SIC], a member of Hamas who is currently in an Israeli prison. Mohammad denies this, and claims he handed the money to another person while still in Jordan, because he suspected the funds were linked to Hamas.”

That’s a far more specific charge, if true, and one that’s entirely unrelated to his work as a cartoonist – at least on the surface. It is difficult, to say the least, to ascertain the “truth” of this situation. Several writers have posted support for Saba’aneh online without making any mention of – or indicating any awareness of – the charge above, instead concluding that this is “obviously” an effort on the part of the Israeli government to chill Saba’aneh’s speech.

On the other hand, Israeli forces have reportedly been working to undermine and interfere with the activities of journalists for some time now, and this latest action might understandably be seen as yet another instance of military force and judicial might being employed in order to silence or stifle dissent.

Factually, the “truth” of this matter is unclear. What is clear: Mohammad Saba’aneh was “sentenced by the Israeli Salem Military Court on April 4th to 5 months in an Israeli prison for “contact with a hostile organization”. He was additionally fined “10,000 shekels.”

Further, during the time that Saba’aneh was held by Israeli authorities he reportedly received only sporadic access to his lawyers and was detained without any charges being brought against him for over a month’s time. Human Rights advocates are correct to raise their eyebrows, their voices, and their outrage over these specific facts, and to demand lawful and just treatment for people like Mohammad Saba’aneh. No man, woman or child should be held without charge or access to an attorney.

Note: The opinions expressed here regarding legal rights are the author’s alone, and do not necessarily represent the opinion of Talking Comics.