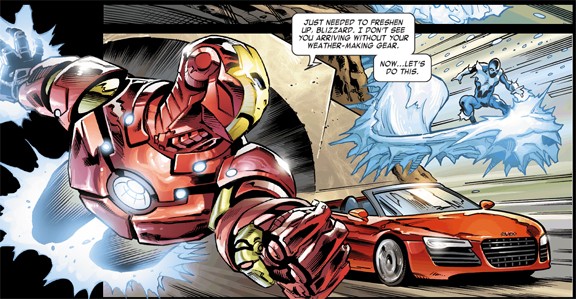 As fans await the arrival of Iron Man 3 in theaters on May 3rd, fans have the chance to read a cool digital comic as well as enter a contest in order to win original art and a trip to Comic Con in San Diego.

In partnership with Audi, Marvel has launched a crowd-sourced Iron Man 3 digital comic which puts the fate of Tony Stark, Pepper Potts as well as their Audi R8 into fans hands after an attack by Blizzard on U.S. Highway 101.  Entitled “Steer The Story,” the interactive comic-which is set outside the IM3 movie continuity-gives readers their own  “Choose Your Own Adventure” story which is written by Jeff Parker, with artist Manuel Garcia, inker Matt Ryan, colorist Anderson and letterer Joe Sabino. It’s an interactive story that has many decision points that give viewers the chance to vote on what happens next.

Throughout the story readers will have to choose from predetermined options but it’s the final scene that serves as a comic creation contest. Using their own original art or photography, fans will be able to construct and submit their own frame for the final scene. The winner will be chosen by Marvel Editor-in-Chief Axel Alonso and editors Jeanine Schaefer and Bill Rosemann choosing a winner.

The winner of the grand prize will receive “an original art board signed by Marvel artists” and a trip to San Diego Comic-Con International for an art review by a Marvel editor. Unfortunately, an Audi R8 is not among the prizes but I think a free trip to Comic-Con is worth almost as much or even more to a fan. You can check out the “Steer the Story” trailer below.