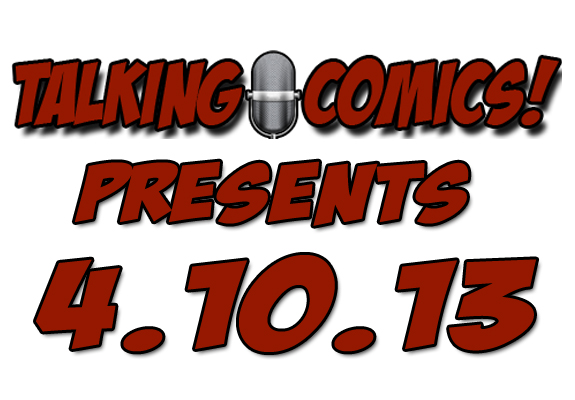 Don’t forget to check out our podcast on our inspirations and influences, our chat with great Greg Rucka, the news of Apple banning Saga from ComiXology, and of course the  reviews from our amazing contributors.

Well, enough with the who, where, what, why and how, I give to you Talking Comics Presents for the books releasing on 4/10/13. 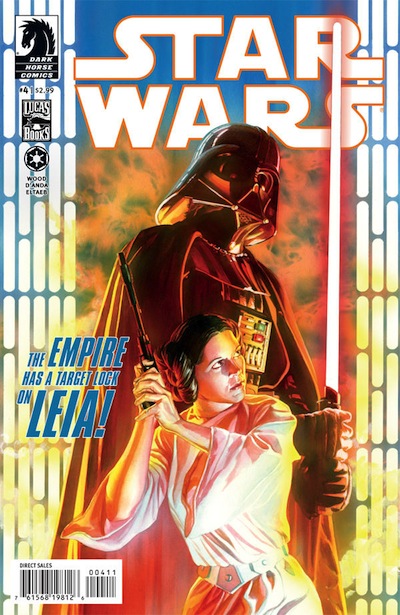 Dark Horse says: “As Princess Leia’s stealth squadron lays a trap for the spy within their ranks, she soon realizes that the Rebels are ill prepared for the Empire’s zealous pursuit. Meanwhile, Han Solo flees from the Empire through the lower levels of Coruscant, and Luke Skywalker enjoys being grounded with a female friend . . .”

Mara Whiteside says: Star Wars #4 – Brian Wood is bringing everything to the table in this series. While the series as a whole is pretty heavy, it has some lighthearted moments. It also has some of the best Leia moments I’ve ever seen. I can’t imagine why anyone isn’t picking up this series. 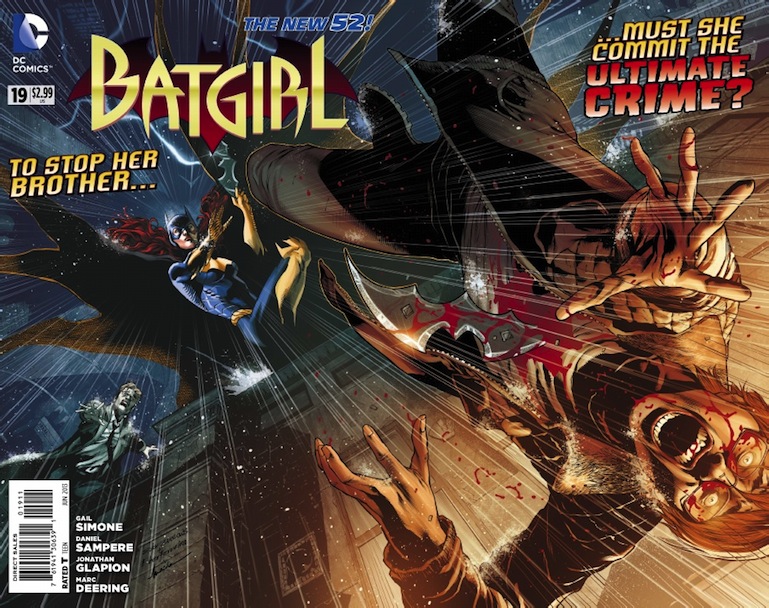 DC Comics says: Will a sibling rivalry lead to a death in the family?

Bob Reyer says: “Gail Simone is back! She brings with her the likely resolution of the James Gordon, Jr. story-arc, and is promising a heinous new villain who might be teased in this issue, as well!”

Stephanie Cooke says: “Batgirl #19 – It’s the return of Gail Simone on Batgirl, so of COURSE I’m excited to see what’s up with Simone and Babs.” 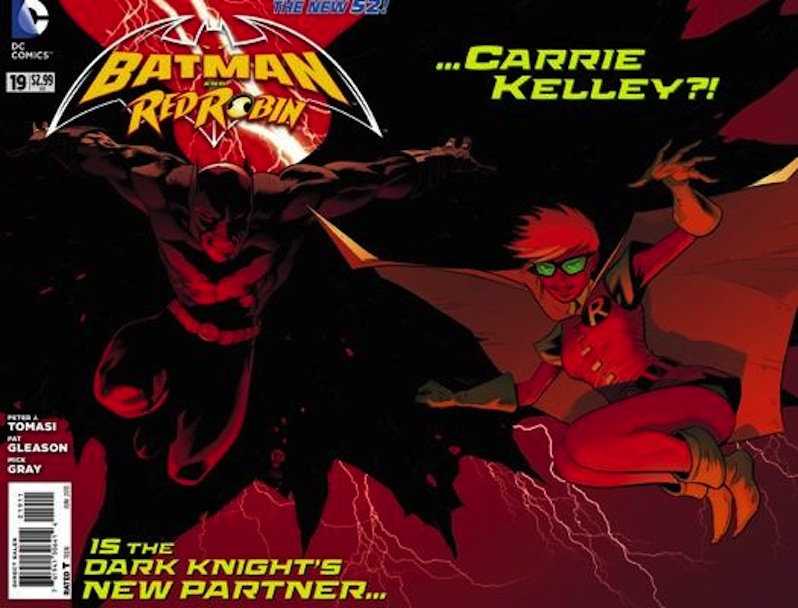 DC Comics says: “On the darkest of nights, who is the one person Batman meets that could change his life forever?”

Adam Shaw says: Batman & Red Robin “Okay, this month I got my comics straight, and I am excited about seeing Tim Drake partnered up with Batman. Pre-New 52 Drake was one of my favorite characters around. Away from the travesty of Teen Titans, I hope we get to see some good writing, and what makes Tim so awesome.” 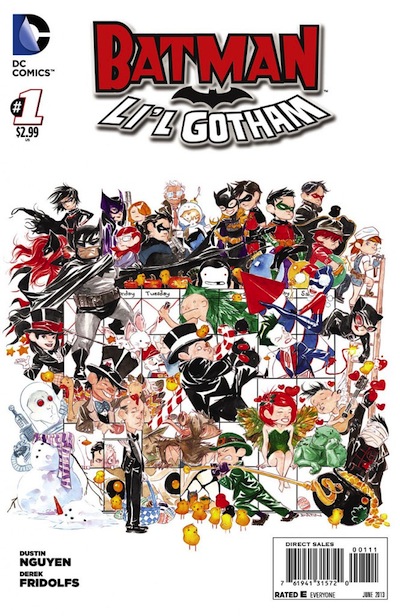 DC Comics says: “The first time in print for this hit all-ages digital first series! First, Robin needs Batman’s help to learn the true meaning of Halloween. Then, on Thanksgiving, Batman and Robin join the families of Gotham City around the table for a holiday feast—and birds of a feather flock together to stage a march against the city…led by The Penguin!”

Bobby Shortle says: On the Talking Comics Podcast we have continually bemoaned the lack of kid friendly books in the comic landscape and so it’s with a lot of excitement that I turn my gaze towards Li’l Gotham. This once digital only series comes into stores with a lot of critical praise and an art style I’m simply crazy about. 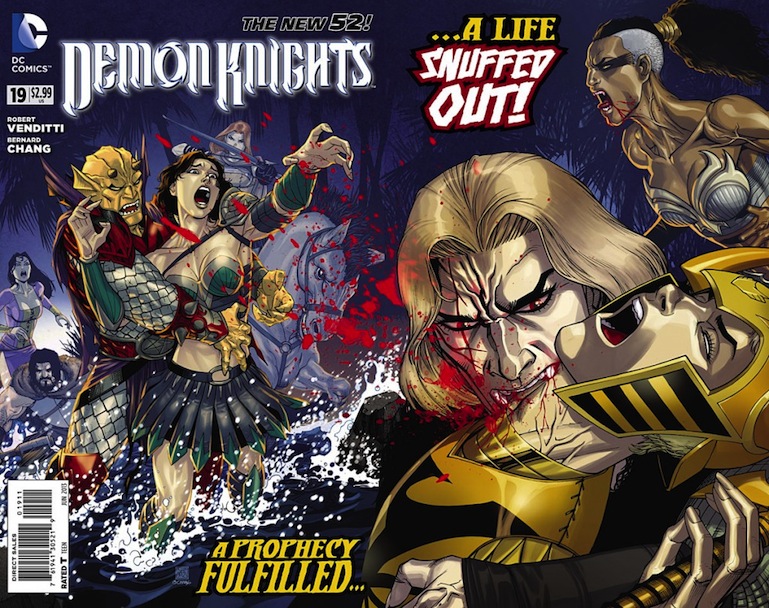 DC Comics says:  “What undead menaces threaten the lives of the Demon Knights?”

Sean Lamont says: “Going off the Bat-trail a bit this week and looking forward to Demon Knights #19.  Isolated from continuity, goofy in its adventurous spirit, and always managing to be a fun romp in Ye Olde DC; Demon Knights has been one of my go-to titles each week it comes out.  And with the team now caught in the middle of a three-way battle royale between medieval Amazons, biblical-rooted vampires, and Vandal Savage and his horde of thugs; this issue shouldn’t prove any different.” 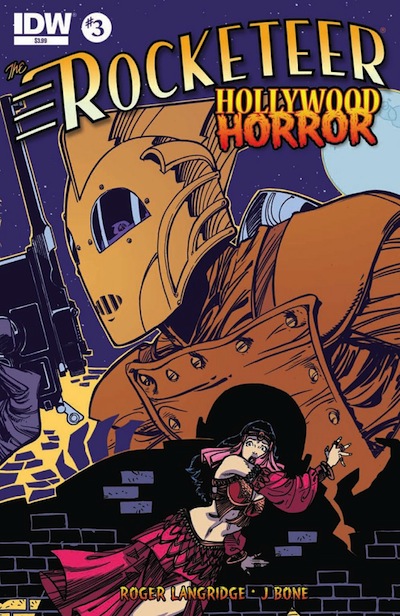 IDW says: His rocket-pack gone, his girl not speaking to him, and all of Hollywood about to fall into the clutches of the sinister Otto Rune…what’s young Cliff Secord to do? And what’s that dangerous-looking thing Peevy’s been building, anyway? It’s back to Square One for the Rocketeer… as he has to learn to fly all over again!

Bob Reyer says: “The plot thickens!” as they were wont to say back in my youth! The Mark Waid/Chris Samnee team was a hard act to follow on this title. but Messers Langridge and Bone have equated themselves quite nicely, and I can hardly wait for “Another thrilling chapter of The Rocketeer, coming to theaters this week!” 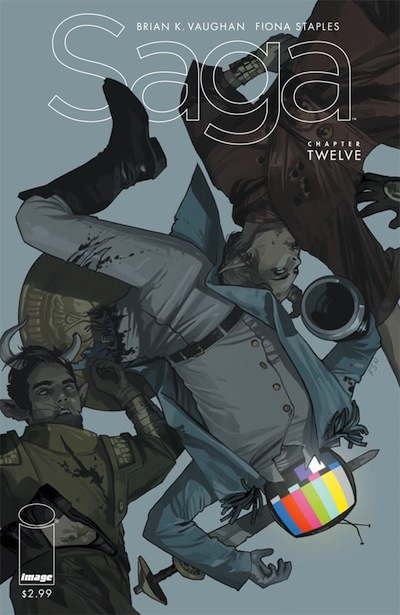 Melissa Megan says: Saga #12 is what I’m most looking forward to this week. This series keeps me hanging every month, biting my nails to see what’s next. Issue #11 left off with such a sad heartbreak, I can’t wait to know where Alana and Marko will go from there. 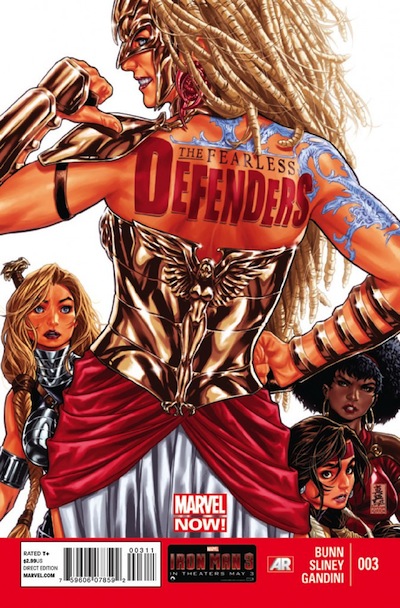 Marvel says:  “WARRIOR WOMAN joins the Defenders! Who is she? And why is she back from the dead? Plus! A city of silent superheroes. And: Defenders vs. Doom Maidens!”

Bob Reyer says:  “This book has been a more-than-pleasant surprise, with a great mixture of fun, action, and plenty of characterization in just two issues. The Fearless Defenders were in a tough spot at the hands of the Doom Maidens when last we left them; can Warrior Woman turn the tide of battle…in either direction?” 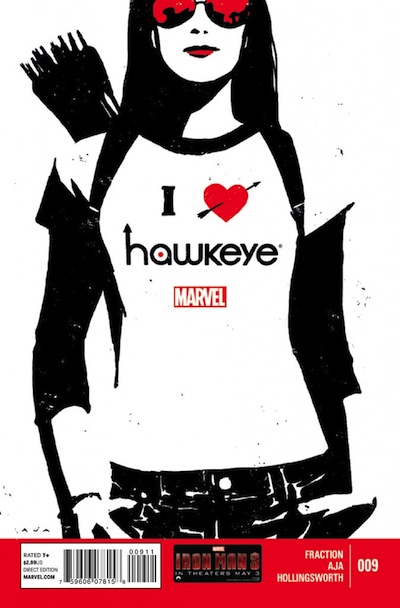 Marvel Comics says: “More ladies, more problems. Featuring: The Girlfriend, the Work-Wife and the Ex-Wife. Plus the tracksuits are back and aim to kill. Good luck, Hawkeye.” 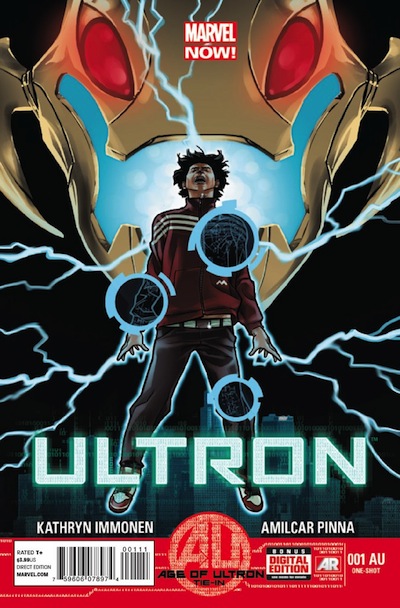 Bobby Shortle says:  “I don’t know who Victor Mancha is, I don’t know any of his history in the Marvel Universe, but the idea of reading a book about Ultron’s son is fascinating to me. Add in a writer I enjoy and a relation to a solid Marvel event, and I’m in. 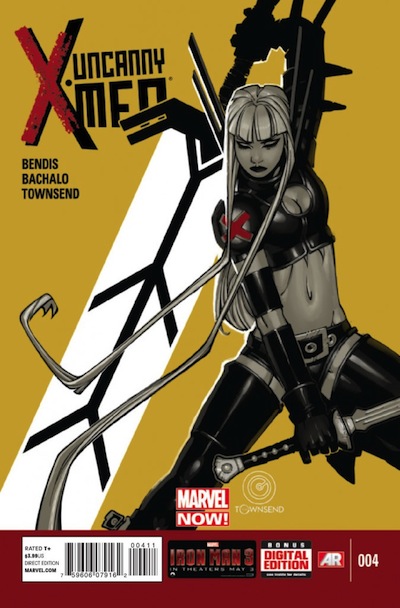 Marvel Comics says: “How is Magik the only one of the Phoenix Five to come out of the experience unscathed? And there is something strange going on with one of the other members of the UNCANNY X-MEN.”

Travis McCollum says: Uncanny X-Men #4 “With the latest issue of All New X-Men featuring the confrontation between the New Charles Xavier and Jean Grey Schools, the latest issue of Uncanny X-Men is here to show what went on from the perspective of Cyclops’ team. How does Emma deal with the Cuckoos? What were Cyclops and the rest of the team doing during the deliberation period? And who does join the team? All should (hopefully) be revealed in this issue.” 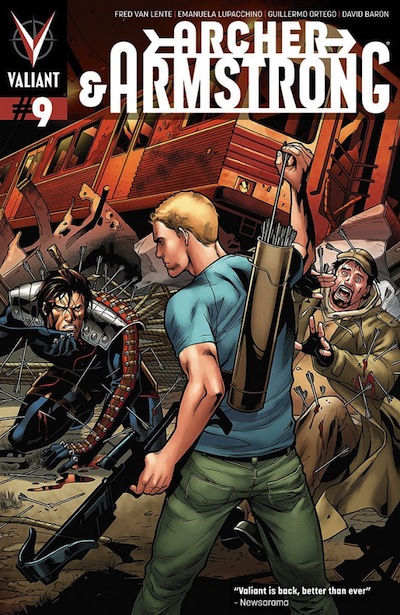 Valiant says: “What cosmic madness has turned Armstrong’s naive teenage ally into a madman with a thirst for universal genocide? Can Valiant’s immoral immortal defeat the evil inside Archer before his brother enacts the ultimate sanction? And once the stardust has settled, what will be the next battle for the undying Eternal Warrior?” 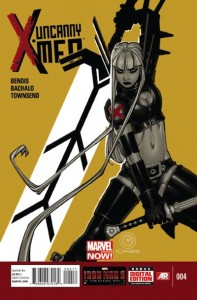 Luke H. says:  “I think the thing I love the most about this run is how connected it is with All New X-Men, and it doesn’t feel forced.” 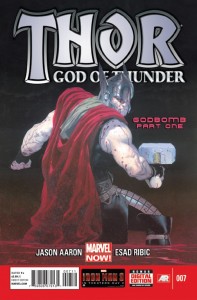 Luke H. says:  “This is one of those books that I put down and say “Wow, that was amazing!” Then immediately pick it back up and read again.”

Brian F. says: “This book starts the God Bomb story and Jason Aaron is killing it on this title.  I’ve never read a solo Thor book before but he’s really sucked me into this universe.  And after reading the solicitations for book 7 I’m really wanting to know what the hell is a Godbomb?  Love your show guys!” 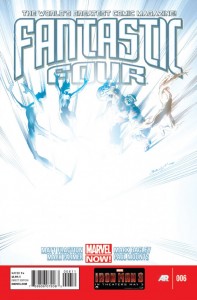 Luke H. says: “After the emotional #5AU issue I’m very interested to how this next one will compare.” 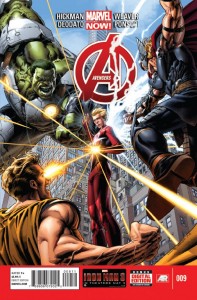 Luke H. says: “Hickman has grabbed me again with this one. I love the new team he has put together and how much he explores there past.” 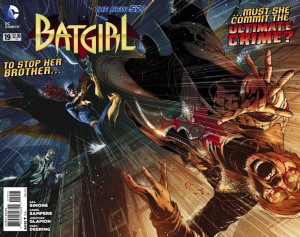 John D. says: “This week it’s all about Batgirl #19. Although there’s a lot happening in the other bat-books this week, I am psyched about Gail Simone’s return to the book as well as the possibility of a confrontation between Barbara and her brother, James Jr. Finally!” 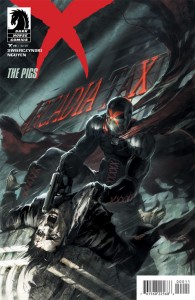 Patrick M. says: “This week I’m really looking forward to the relaunch of Dark Horse’s masked vigilante X. This was a super gritty and violent book back in the 90’s that had our antihero stalking the streets of Arcadia dispensing justice like Punisher on steroids. Can’t wait.”

Well that’s all for this week’s Talking Comics Presents, don’t forget to send your picks and submissions to bobby@talkingcomicbooks.com, and check out the Talking Comics Podcast. On this week’s show we discussed Green Hornet, the new Fables game, and Superior Spider-Man!