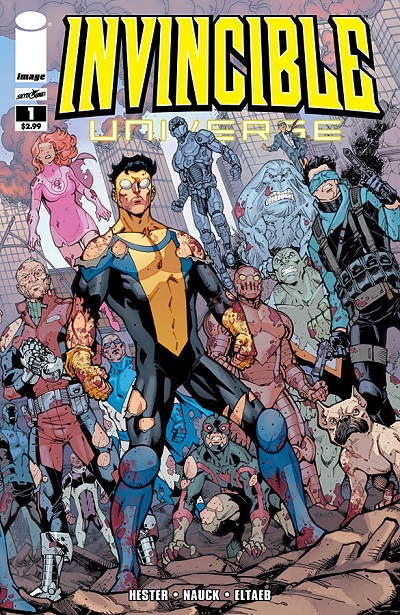 Shortly after I got into comics, I was told (incessantly) by my more well-versed compatriots about the amazing storytelling freedom in the cape genre that the title Invincible was able and willing to do.  Obviously intrigued, I hopped on out and picked up the next issue, finishing it with what I could only assume was a look of dumbfounded confusion on my face.  Because freedom comes at a cost, and that price was a complexity that made the title practically impenetrable to myself, and relegated the 15 preceding volumes of trades onto the backlog for me at the time.  So, when I saw the new spinoff of Invincible Universe was just starting its way this week, I found myself both excited and apprehensive at the same time.  But now that I have finished reading it, I can happily state that I was absolutely justified to be excited and apprehensive about this new launch in the Invincible ‘Universe’.

Chaos has struck Earth after the unnatural disasters in the wake of Dinosaurus’ actions have claimed the lives of hundreds of thousands people and caused unfathomable damage to the infrastructure of the globe.  As the super-powered individuals of the world unite under the banner of the Global Defense Agency, Cecil Stedman works to utilize their unique abilities to help pull the world back from the brink of civilization breakdown.  But how far is the leader of this organization willing to go, and what agenda drives him as he manipulates all who surround him into doing what needs to be done?  Meanwhile, an old foe turns to the GDA in a desperate plea for assistance to keep yet another global threat from coming to a head.

Jumping into this spinoff cold to the events taking place in the main title, the only thing I can possibly compare this book to is blindly picking up an issue of the Legion of Super-Heroes over at DC.  Why you ask?  Because there is a freaking army of characters thrown at you in rapid-fire succession (30 unique individuals to be exact).  Where Invincible Universe surpasses my comparison though, is that it does not stop and try to explain who and what all of these people are in its first issue, bogging itself down and confusing the reader just as they walk in the door.  You are supposed to be impressed at the vast array of heroes affiliated with the Global Defense Agency, and the majority of the characters are introduced in splash pages that do little more than affiliate the individual with their chosen sub-team (another positive trait to break them up into smaller bite-sized groups) while establishing the chaos of the current day and what they are doing to fix it.

In that regard, the issue reads more as a necessary recap of where all of the pieces stand in the grand scheme of things by utilizing a new assistant to Cecil as the gateway character, which may turn off veteran readers for the first half of the book.  The back half is where the title really starts to take its own path though, focusing on a single subgroup of characters with their own set of fantastic problems there in the Agency headquarters, while introducing an old villain as the antagonist in an unlikely manner.  And where the first half was daunting in its scope of recap, the rest of the issue reads much more naturally by introducing easily distinguishable characters with a very creative selection of problems seeded from the get-go to get the plot rolling forward.

The artwork provided by Nauck seems to be very tonally consistent with the rest of the Invincible stable of titles, and is downright astounding in its range of motion as he captures the rescue efforts in multiple half-page scenes.  As a new reader, the cartoonish look is a little off-putting at times (in contrast to the death and decay running rampant in the background), but as it is in the spirit of the other titles, I am sure it is something I will grow used to.  Facial expressions are a little inconsistent throughout the title, but again, with the exaggerated pencils to match the style of the art that may be entirely intentional.  Something that I really enjoyed was the unique character designs and portrayals to really make each and every individual stand out visually.  That, alongside the wonderful color work by Gabe Eltaeb, really helped ease some of the anxiety of having so many characters at once by making them so easily distinguishable from their counterparts.

Much like my excitement mixed with my trepidation, I’m going to give this one a split vote.  Overall, it is a fairly solid start to what looks to be a tent-pole title in the Invincible realm; but those who have been reading the Invincible titles will be perturbed to essentially buy half an issue of recap, while those who are new will find themselves fairly daunted (though not as bad as it could have been) by the massive cast and scale of back history.  I think if the book continues in the same manner as it was heading in the back half of this issue, it should be able to easily overcome those hurdles moving forward, and deliver an entertaining central title for the Invincible Universe.