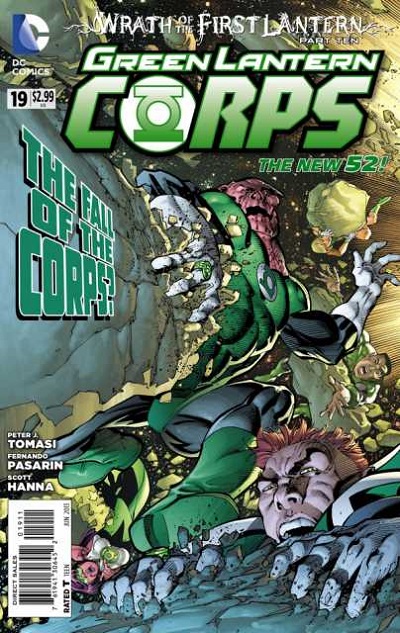 Doppelgangers, Lanterns, and Planterns; oh my!  Issue 19 comes barreling into stores today filled to the brim with more than all three than you can shake a stick at.  And if one thing can always be said about the work that Tomasi has put into this title over the years, it is that he has done everything he could to expand the rosters while making each member highlighted a unique individual amongst the ranks of the universe spanning army.  But with the last few issues focusing on smaller and tightly focused stories of Lanterns on their own, can he go back to spotlighting the Corps as a whole with the same level of care?  He most certainly can, but the cost to do so unfortunately makes this issue feel very cheap in the process.

The First Lantern continues to take his fill of emotional nom-noms from the various Corps members around the galaxy, but one giant marble has grown weary of this hungry hungry hippo and means to put an end to his gorging.  Saving the troops of the Corps in one fell swoop, the emerald army now find themselves together again, but facing the cold harsh opposites of their own emotional weak-points.  Can the Corps leave one perilous challenge behind to overcome the next danger presented?  Or will this hurdle drain them all before they can even strike back against the First Lantern for his torment?

It’s the penultimate chapter of the Tomasi era of Green Lantern Corps, and he’ll be damned if the gang is not all here to wish him well as we charge into next month’s finale.  And while I have been a great fan of the military aspects of the GLC when they are assembled together, this issues ending played out more as a wiping clean of the slate for the event thus far; which is saying something since the only events up to date have been the individual ‘What If’ tamperings of the First Lantern.  It makes me feel atrocious to be so critical on an issue that moves the plot forward (as that has been a chief complaint of mine during the event so far), but the Ex Mogachina reset button pressed to essentially reassemble, revitalize, and recharge the Corps rings hollow (pun intended) and practically invalidates what little has preceded it in the way of story in this title so far.  I’m happy to see them all together (especially the +1), I’m elated that the timeline poking is at an end, and I am excited to be heading into the big crescendo; but this issue as a build-up has left a lot to be desired in comparison to Tomasi’s previous supportive issues.

Artistically, Pasarin has the obvious pleasure to ply his trade towards a battle royale between the entirety of the GLC and their emotional evil twin constructs that easily shows how much he enjoyed doing it.  With pages of a ‘silent’ war being waged between the two armies, the storytelling was left to his pencils, and he does a very good job and cutting through the chaos to highlight the exciting scenes within.  Pasarin’s artwork is extremely clean, yet detailed, which is about as perfect a combination as you can get to put a battle of this scope to the page.  With a commonality that is making me almost expect it in each issue at this point, Gabe Eltaeb’s colors (HEY!  Didn’t I just compliment you over on Invincible Universe?  Quit hogging all the praise.) continue to put the shine on the artwork that make it stand out from similar scenarios elsewhere.

If you are following the crossover to the end, this one is a buy just for the setup to the big ending next month.  While non-regular readers will find a rather fun mass battle inside this issue, those looking for a payoff to the conflict will be left a little sore by the outcome.  It may just be the brake-slamming pacing of the last two issues that makes this chapter feel out of place, but overall this is a middling issue that looks to payoff into an explosive finale.

Chapter 10: Green Lantern Corps #19 – Buy for the event, pass as a single issue.  Sets up the GLC for the finale next month.