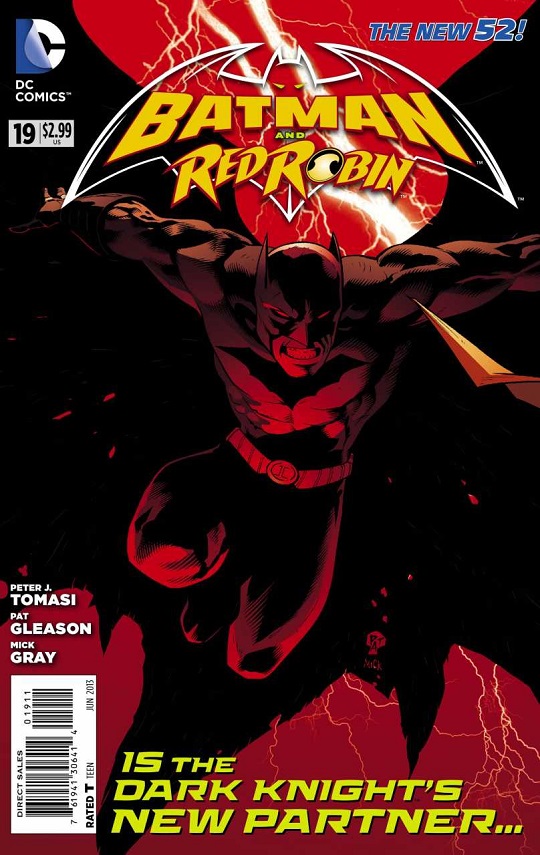 Issue #19 of the series sees the first alternate title since the death of Damian Wayne, and we will continue to see title changes for the foreseeable future. The issue’s cover shows the Red Robin (Tim Drake) moniker in the marquee, but the fold out cover reveals Carrie Kelley as a possible new partner for Batman. Whoa, talk about confusing.

I’m going to talk about this issue in detail, so if you want to avoid some possible spoilers, then skip down to The Verdict below.

The issue opens with Bruce finding a letter from Carrie Kelley to Damian. Apparently Damian was taking dance lessons in private, and she was his teacher. Bruce went to her house to pay her what Damian owed her and return some of the dance videos.

The story then jumped to Frankenstein (Agent of S.H.A.D.E) fighting some monster. Batman abducted him and took Frank to the castle of his maker, Victor von Frankenstein. Batman was hoping to uncover the secrets of forbidden science to resurrect Damian. To me, this felt out of character for Batman. He can be ruthless at times, but he doesn’t seem like the kind of guy that would dissect another hero to learn their secrets and resurrect a loved one. Although, grief makes people grasp at any straws they can fine.

I was glad that Tomasi addressed these out of character actions by Bruce through the juxtaposition of the two characters. Frankenstein was level headed and could empathize with the loss of a son. He spoke truth and wisdom. Batman called Frank a monster, while acting like one himself. Who is more human here?

Meanwhile, Alfred called on Tim Drake to check in on Bruce, and find out why he was not in Gotham. Drake tried to talk some sense into Bruce. Harsh words were exchanged and the two had a tussle. In the end Tim blows up any equipment needed for the resurrection.

Tim’s appearance is rather brief, and it honestly could have been any character drawn in. I was excited to seem Red Robin’s name on the cover, for what I thought would be the two teaming up again. I was excited when Alfred called him up, but I was left disappointed for his rather overall generic role in the story. Tomasi could’ve had S.H.A.D.E. agents show up to save their missing operative, but ultimately, it had to be a member of the Bat-family to make an appearance here. Someone that knows Batman needs to be sending the message to him. It’s just too bad we didn’t get to see much of Tim Drake’s prowess and detective skills in action.

Okay, so I wrote a lot about what happened in this book, and I did that for a reason. There is a lot going on in this book. It feels like there is too much going on. All of the cameos feel a little forced. Carrie and Tim could have been anyone, and I feel they were more of a distraction from the story than an addition to it.

Hit or Miss. Batman and Red Robin #19 was a title I was pretty excited to sit down and read this week. With a few cameos it was able to appease some of my inner fanboy, but ultimately it left me slightly dissatisfied. Should you buy it? If you’re a big fan of Frank, then give it a look. I feel it takes a small step back from Bruce’s mourning and grief in the other Bat-Books. The cameos come off more as fan service than story essentials. Also, I didn’t mention it above, but the art is pretty great. That is all.