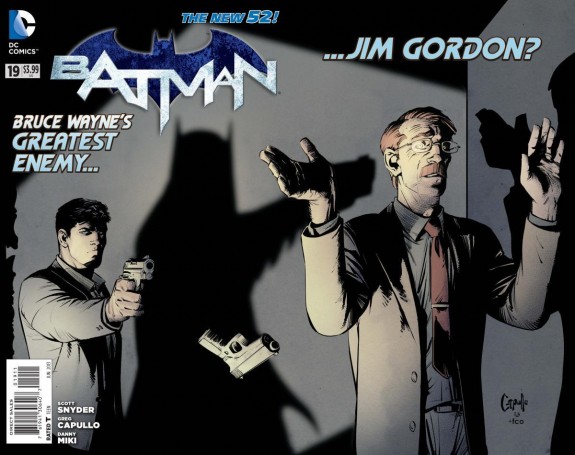 Back Up Story written by James Tynion IV

It has been a tough few years for The Dark Knight. He’s faced startling revelations about his city and his family. His support structure has been torn away by his greatest enemy, and he’s had to endure the loss of his son. These universe changing events have not all been crafted by Scott Snyder, but it’s been the epic stories in Court of the Owls and Death of the Family that have shaped who the character is in the New 52.

That work will continue in the upcoming Batman: Zero Year, but first we get Batman #19, part one of a  two part story, that sees Bruce still dealing with the his recent loss and facing down one of his best villains.  This break from the long form storytelling of the past few years is an invigorating change of pace that showcases the Dark Knight’s sleuthing abilities and gives us a fun “whodunit” to chew over before the larger story begins again.

Batman #19 is a mystery story and because of that it involves a lot of Bruce Wayne breaking down facts. Writer Scott Snyder fills the book with long, luscious voice over that emphasizes the Dark Knight’s abilities, not just as a costume adventurer, but as the world’s greatest detective. There are scenes of the Caped Crusader sifting through paperwork, digging through computerized records and analyzing chemical samples and in Scott Snyder’s hands these moments are as captivating to me as any of the action beats in the book. This emphasis on Bruce’s mental prowess gives the book an old school Denny O’Neil feeling, while still retaining the fresh edge Snyder has brought to the title since his run began.

The voice over may feel very O’Neil, but its cadence reminds me more of another Batman legend; Kevin Conroy. I could almost hear his voice emanating off the page and it immediately gave the warm and fuzzy feeling of sitting down to watch Batman: The Animated Series all those years ago. That feeling is enhanced further by the use of the villain of the story. I don’t want to spoil his identity, but the very fact that this foe has powers adds an element that hasn’t been present in Snyder’s previous Batman entries.

There isn’t much to say about Greg Capullo that hasn’t been said before. The man is an absolute beast when it comes to his ability as not just a visual stylist, but as an emotional storyteller. The opening scene packs a punch, not because of the words that are spoken, but because of the subtle look on a character’s face. It’s the ability to convey a full range of human emotions month in and month out that absolutely floors me. Oh, and the bad ass new Batwing, and the sublimely disgusting depiction of the villain, aren’t so bad either.

“Ghost Lights” the back up tale written by James Tynion IV and with art by Alex Maleev sees Batman teaming with Superman to tackle a supernatural disturbance in Gotham.  The story is to be commended for its uniqueness in its incorporation of Superman and its use of magic in the usually down to earth Gotham. However, Alex Maleev’s moody art, which I usually enjoy, is too impressionistic for the level of detail being conveyed in Tynion’s narrative. So, we get a lot of our characters saying what we are supposed to be seeing, instead of what we actually are. That being said Tynion has a great grasp on the voice of both heroes and this keeps the back up from being a detriment to the book as a whole.

Buy It – Batman #19 is great as a continuing story of the Caped Crusader, but is also a perfect jumping on point for new readers. This self contained and engaging mystery yarn will have you thinking of your Batman favorites, Denny O’Neil, Paul Dini, yet still marveling at how it can also mange to be singularly Scott Snyder’s. It’s a smart, exciting and beautifully drawn comic, that like every issue of this Batman run is not to be missed.