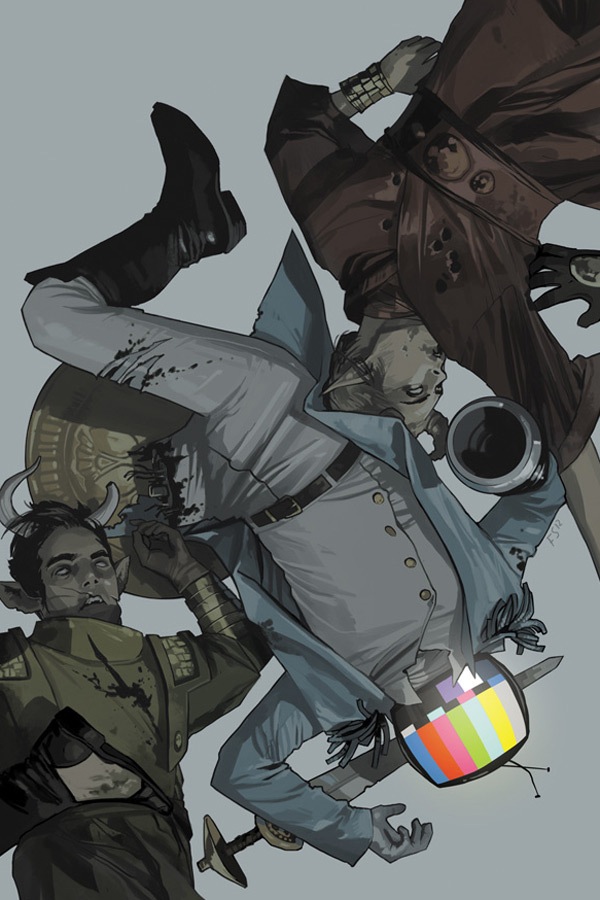 The news came out yesterday that Apple had apparently banned Saga #12 due to it’s suggestive content. Turns out that it was actually a misstep on ComiXology’s end and not actually the fault of Apple:

In the last 24 hours there has been a lot of chatter about Apple banning Saga #12 from our Comics App on the Apple App Store due to depictions of gay sex. This is simply not true, and we’d like to clarify.

As a partner of Apple, we have an obligation to respect its policies for apps and the books offered in apps.  Based on our understanding of those policies, we believed that Saga #12 could not be made available in our app, and so we did not release it today.

We did not interpret the content in question as involving any particular sexual orientation, and frankly that would have been a completely irrelevant consideration under any circumstance.

Given this, it should be clear that Apple did not reject Saga #12.

After hearing from Apple this morning, we can say that our interpretation of its policies was mistaken. You’ll be glad to know that Saga #12 will be available on our App Store app soon.

We apologize to Saga creator Brian K. Vaughn and Image Comics for any confusion this may have caused.

The one thing that’s interesting out of this whole story is that ComiXology themselves tweeted about the matter yesterday and said it would be available to buy:

“Concerned Citizens, we WILL have #SAGA12 available for purchase at http://comixology.com . Once purchased, you can sync it to your app!”

So what really is to be believed? Either way, Saga #12 will be available to purchase digitally on the iOS store shortly. Leave your thoughts in the comments below.

“I wanted to apologize to everyone for this entire SAGA #12 kerfuffle.  Yesterday, I was mistakenly led to believe that this issue was solely with Apple, but it’s now clear that it was only ever Comixology too conservatively interpreting Apple’s rules.  I’m truly sorry.  I never thought either company was being homophobic, only weirdly inconsistent about what kind of adult material was permissible.  I’m grateful that the situation was cleared up so quickly, and I’m delighted I can go back to reading smutty comics on my Retina Display iPad.”

It was recently announced today that Saga #12, the latest issue of the critically acclaimed comic, has been banned from the Apple App store and will have to be purchased elsewhere. The reason behind the banning is due to two small images (located on the monitor of Prince Robot IV) depicting two men having sex.

Brian K Vaughan had this to say in a press release regarding the situation:

“As has hopefully been clear from the first page of our first issue, SAGA is a series for the proverbial “mature reader.”  Unfortunately, because of two postage stamp-sized images of gay sex, Apple is banning tomorrow’s SAGA #12 from being sold through any iOS apps.  This is a drag, especially because our book has featured what I would consider much more graphic imagery in the past, but there you go.  Fiona and I could always edit the images in question, but everything we put into the book is there to advance our story, not (just) to shock or titillate, so we’re not changing shit.

Apologies to everyone who reads our series on iPads or iPhones, but here are your alternatives for Wednesday:

1) Head over to you friendly neighborhood comics shop and pick up a physical copy of our issue that you can have and hold forever.

2) While you’re at it, don’t forget to support the Comic Book Legal Defense Fund, which helps protect retailers who are brave enough to carry work that some in their communities might consider offensive.  You can find signed copies of Saga at the CBLDF site right now.

4) If all else fails, you might be able to find SAGA #12 in Apple’s iBookstore, which apparently sometimes allows more adult material to be sold than through its apps.  Crazy, right?

Anyway, special thanks to Eric Stephenson and everyone at Image for supporting our decision, and for always being so supportive of creators.  Sorry again to readers for the inconvenience, but I hope everyone will be able to find an issue that Fiona and I are particularly proud of.  And after you do, please check out PanelSyndicate.com, the new digital comics site I own with artist Marcos Martin, which remains 100% uncensored by corporate overlords.”