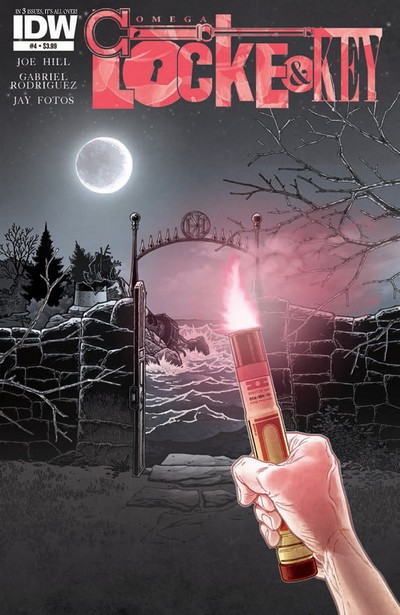 I’m not gonna start this review by offering a recap of what has been happening in Locke & Key. If you haven’t been keeping up with the series, there’s no way in hell you can start now and understand a bit of it. The evil, murderous Dodge has the Omega key and is wrecking havoc in the Locke house, still using the body he stole from little Bode Locke. This issue opens with a terribly sad scene of drunken, abused Nina Locke crawling on the floor, trying to reach help. Bode’s ghost is there with her, trying to help her find the strength to save herself and stop Dodge, but she struggles with her disbelief that it’s actually her young son speaking to her in spirit form.

Duncan and Tyler Locke are trapped in a trunk by the dark shadows, now brought to life and under the command of Dodge. Only light can keep them safe. Kinsey Locke and her friends are partying down in the caves, celebrating their final day of high school. She’s completely unaware of what Dodge has set in motion: the release of the brutal creatures that wait beyond the black door for souls to consume and bodies to steal. Mentally handicapped family friend, Rufus, is on the march back to the Locke house to help rescue the family and he’s currently the only one aware that Bode is not what he seems.

The Omega series is coming to a close fast and the  shit is hitting the fan. The entire Locke & Key series is incredible, but Omega has just been a stew of everything that makes the series powerful, seasoned to perfection. The artwork of Gabriel Rodriguez shines with all the shadows released to play out their duties in Dodge’s terrible scheme. The family are being punished yet again for their ancestral connection to the magical keys and Locke house. Serious damage is being done and there appears to be little chance of stopping the terror from escaping that black door.

Verdict: Do I even have to say this? This series is one of the most intense, emotional and terrifying things being created in comic books. It’s top quality work and you should be buying it. This is a great time to start reading if you aren’t already because with the final issue of Omega this chapter of the Locke family will conclude.