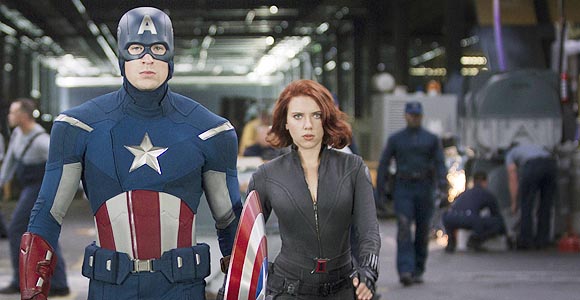 Over the weekend revealing information for Marvel’s Agents of S.H.I.E.L.D was released and now it’s Captain America’s turn to give us the 411. Today in an official synopsis blurb from Marvel Studios, it was revealed what role Black Widow will play in the sequel film, as well as some casting confirmations.  In addition the first official shot from the The Winter Soldier was also revealed! Hit the jump to take a peek.

While most of what was stated was already known by fans, there are a few new tidbits that should get fans even more excited about the upcoming film. For starters, the film will pick-up right where ‘Marvel’s The Avengers’ left off, focusing on Steve Rogers struggling to embrace his role in the modern world as he teams up with Natasha Romanoff, aka Black Widow, to battle a powerful yet shadowy enemy in present-day Washington, D.C.

So Black Widow and Cap are sharing the leading role together? Well done Marvel, well done indeed, but there’s more. The summary also confirmed the return of Hayley Atewell as Peggy Carter which has been suggested before but not confirmed. The summary didn’t say in what capacity Carter would be shown in the film. Most likely it might be flashbacks. Marvel also named Emily VanCamp as Agent 13 aka Sharon Carter.

If you’re not familiar with the character that Robert Redford is playing, Agent Alexander Pierce here’s a little bit of info. According to the Marvel Wiki, “Alexander Pierce majored at S.H.I.E.L.D. (Supreme Headquarters International Espionage Law-Enforcement Division) Academy in civilian surveillance and served in S.H.I.E.L.D.’s Accounting Department before becoming a “sleeper Agent” of S.H.I.E.L.D. as an expert in decoding Class A dispatches from the subversive organization HYDRA.”

Captain America: The Winter Soldier will be released April 4, 2014. I don’t know about you, but with this new information I’m even more stoked about this film. What about you?

6 thoughts on “Black Widow To Share The Lead Role In Captain America: The Winter Soldier?”