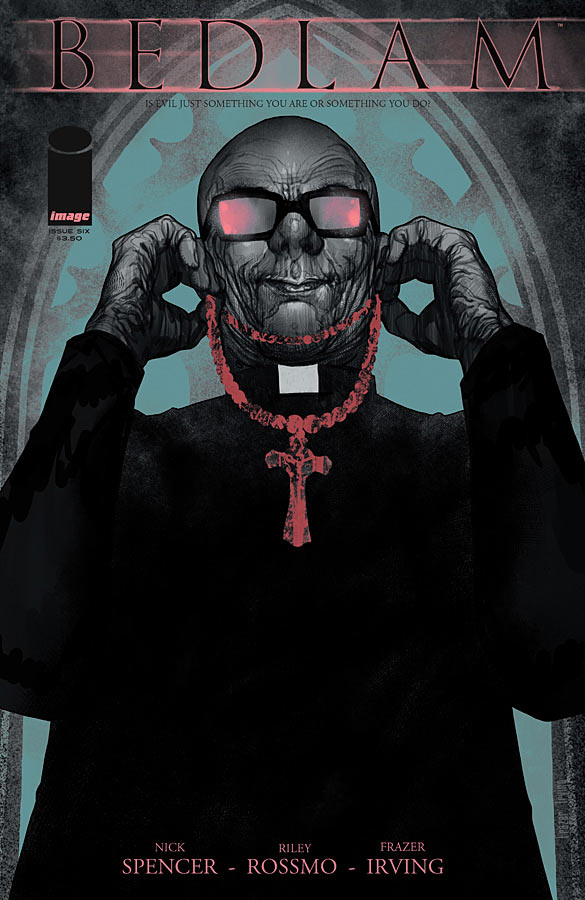 Bedlam, Bedlam, Bedlam; wherefore art thou so terrifyingly enthralling? Nick Spencer and Riley Rossmo bring Officer Acevedo and Fillmore “Madder Red” Press’ first case to close with yet another deeply unsettling, visually stunning issue of Bedlam. Fillmore sits down Silence of the Lambs style with Archbishop Warton, the religious-zealot-mastermind behind the rash of slayings plaguing the city of Bedlam, and the two engage in a sociopathic tête-a-tête. Meanwhile, the First engages in an absolutely brutal brawl with Warton’s archangelic henchman, Eric.

Spencer has crafted a fantastic arc as Fillmore negotiates and manipulates his identity as the supervillainous Madder Red into his work with Officer Acevedo. The conversation between Warton and Press is frightening in its foreboding, serene tone, which Spencer expertly counters with the ferocious fighting between the First and Eric in the hospital. It’s a brilliant story, and Spencer paces it out carefully and expertly.

Spencer’s loaded script calls for a wide spectrum of framing and stylistic shifts in the artwork. Riley Rossmo is certainly up to the task. Between the talking-head conversation and the high-octane action sequence, Rossmo negotiates each beat perfectly with his gritty, kinetic style. The coloring is particularly effective as the mood shifts over the course of the issue. Rossmo’s artwork has been a high-point for this series, and I hope Ryan Browne keeps up the aesthetic excellence when he takes over art duties next issue!