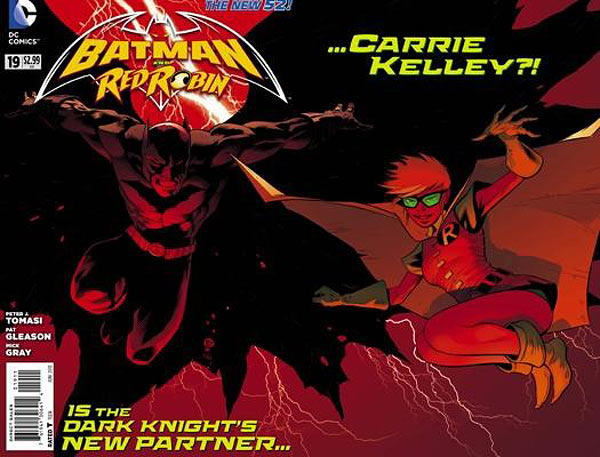 In a story that broke earlier today, it seems as though Carrie Kelly (Frank Miller’s Dark Knight Rises) will be reintroduced back into the DCU and featured in the upcoming Batman and Red Robin #19. Rumors are circulating that with her introduction it could mean she is becoming the next Robin, but Peter J. Tomasi is assuring us that it might not be that easy:

“What you’ll find out once you crack the book, is that she’s not exactly the “new Robin”, but I don’t want to spoil the story and her introduction into Bruce Wayne/Batman’s life…It’s all about characters and stories that stir the pot and present tension and new dramatic possibilities.”

Is this the same Carrie Kelly from Frank Miller’s series though or a woman who happens to have the same look and name as Frank’s chaacter? And is this in continuity, or just a one-off? Tomasi explained:

“It’s a New 52 version, but we’re staying close to Frank Miller’s visual template and personality of Carrie Kelley. She’s a college kid who’s got spunk and speaks her mind. This is not an alternate-earth Robin, this is simply a girl named Carrie Kelley who we learn knew Damian which in turn weaves her into the fabric of the DC Universe for the first time in 25 years.

It’s all real. It’s all in continuity. It’s all part of the Batman Universe in the here and now. Carrie Kelley has found her way into the New 52 and she’s here to stay — in what capacity is anybody’s guess — except mine of course. I’ve got plans for Carrie that play well into the future”

So how did talks about introducing Carrie Kelly happen? Have they talked to Frank Miller about it? Tomasi explains:

“At a DCU story meeting on something entirely unrelated to Batman many moons ago, I started talking to our publisher, Dan Didio, during a break about Robin’s upcoming death and lo and behold here we are with a living and breathing Carrie Kelley in the pages of BATMAN AND ROBIN No. 19!

Having Carrie Kelly show up is what the New 52 is all about giving fans the unexpected and exciting. Readers shouldn’t worry. I’m going to take good care of Carrie and we have some great stuff in store for her. We hope Frank enjoys the stories we tell.”

What’s your opinion on Carrie Kelly becoming part of the New 52? What do you see her future like? Leave your thoughts in the comments below.