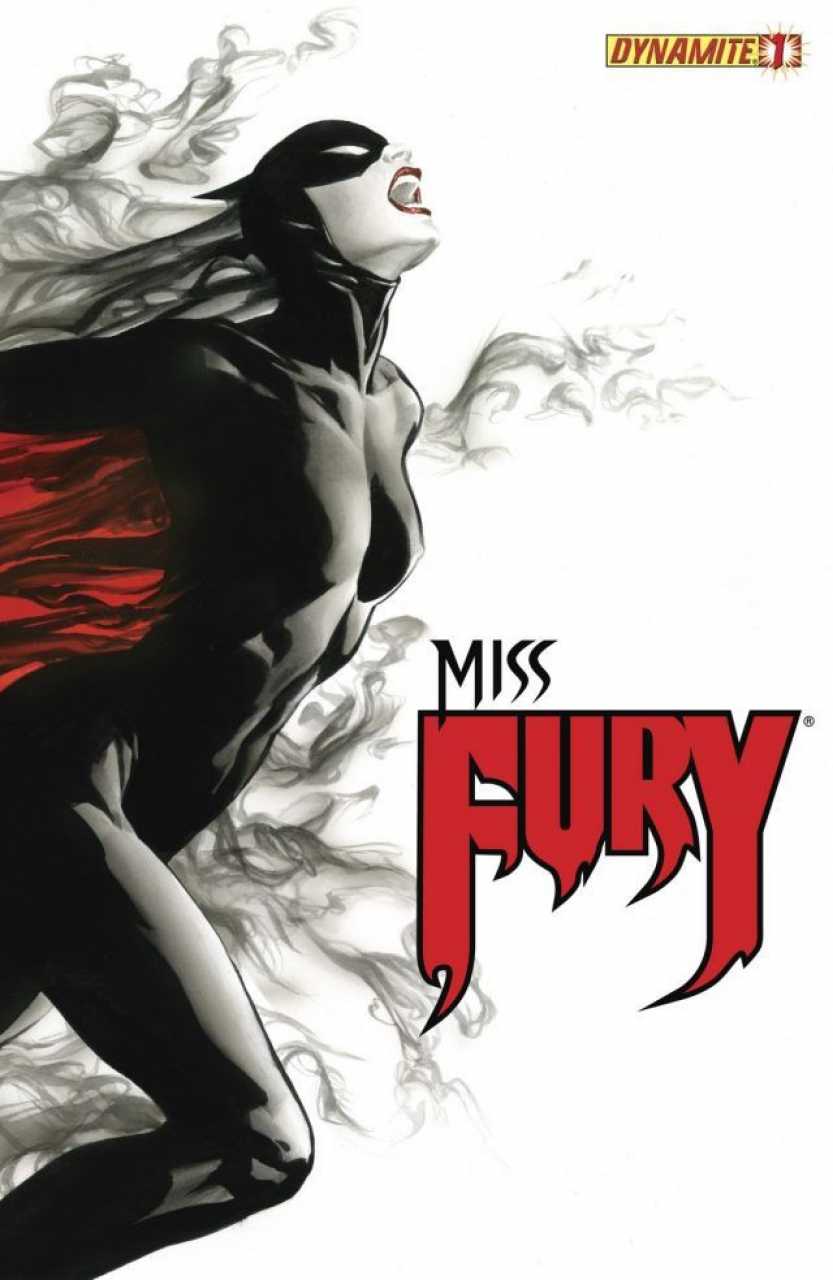 (Aren’t you giving yourself a bit too much credit, Robert?   Audrey)

I would say Audrey, that those 14 people who read my Tarpe Mills piece do deserve the follow-up, so as they know whether this new version of Miss Fury is worth their time and money, don’t you think?

(Well, on that basis, carry on darling. )

Now that that is out of the way, I must say I was quite torn about this new project from Dynamite Entertainment; on one hand, it would certainly heighten awareness of Ms. Mills and her seminal super-heroine creation, but this new Miss Fury could also fall prey to some of modern comics’ more—how shall I say this—licentious excesses.  The book itself highlights (or should I say “headlights” for those of you who have read Dr. Wertham!) this dichotomy, but let me save the worst for last, and begin with the good features of this new series.

The Alex Ross cover shown above (1 of 14—will this madness never end!!) is absolutely stunning, and much in keeping with the spirit (and body dimensions!) of Ms. Mills’ original. I think so much of it that I will hope to find the variant “no logos” edition at a reasonable price, and frame and hang it in the “super-heroine corner” of my kitchen.

(The colors by Ivan Nunes are quite lovely, Robert.)

Look, I’m sorry folks, but that’s about it for the good parts.

Firstly, avoid at all costs the insulting and hideous “torpedo cover” variant shown below:

(Artist name withheld, as I don’t rat on people!)

(There is actually one that might be worse, with Miss Fury’s costume in tatters as if it’s a lost cover from Adam Warren’s Empowered, but there it would be on-model, as that is an “adults-only” book!)

While I’m on the subject of the art, let’s begin with the interiors by Jack Herbert. At first glance, they do seem “pretty”, with some interesting attention to detail (particularly to Marla Drake’s…umm, “equipment”) but at closer examination, there are some oddly composed panels, as well as some peculiar close-ups(of what seems to be Olivia Munn!), with off-putting facial expressions and structures.

As I can’t determine whether the details of the scene dynamics and page layouts were writer or artist determinations, let me take them as a joint effort, and move on to the “story” by Rob Williams. (I will divulge some plot points here, so you might consider this a “spoiler alert”, I prefer to think of it as “fair warning”!) In general, this new MF (I will only refer to this new title by its initials from here on in; that’s all it deserves!) is rather mean-spirited, and chock-a-block with gratuitous violence, and why not, while we’re in a degrading mood… some “naughty bits”, too!  Marla Drake has had her origin “enhanced” to include a mystic ceremony to grant her super-human powers, the charming act of tying a lecher to a tree so that he can be killed by hyenas, and some shtupping on the veld, as if things weren’t ludicrous enough already.

Back in New York, Marla Drake seems to have gotten herself confused (infused?) with Selina Kyle, as Tarpe Mills’ glamorous socialite has become, in this new MF, one of Manhattan’s… most notorious jewel thieves?!? Has anyone involved in this project actually read any of the original Miss Fury, or did they look at the covers and (very) simply extrapolate?  There is some very clever dialogue, such as in this exchange between Marla and an American Museum of Natural History executive, who has just praised her late father as a great man:

MARLA:  He was a f***ing a**hole whose heart finally gave out fifty years after it had actually died. (Censored by me; she flat out says what you think she does; pithy, right?)

MUSEUM GUY:  Umm…Well, yes. ummm every family has its…

MARLA:  You came over here either because you’re hoping I’ll give money to the Museum like Daddy did or because you’re a lechorous old man and you’d like to screw me, right?

(George Bernard Shaw should rise from the grave and weep over not having used dialogue such as this in “Pygmalion”!)

I could go on and rant about the new MF‘s apparent fascination with gun-play (I don’t recall the original shooting out someone’s knee-caps!), or her seeming dis-regard for the War during the sequences set in 1943, but I feel the bile rising in my throat, so let me conclude by simply saying that if you were at all intrigued about Tarpe Mills’ Miss Fury through my article, do yourself a great favor and treat this new MF as if it doesn’t exist, and with the money that I just saved you, start a fund to purchase the IDW collection that I clued you in to the last time we spoke. 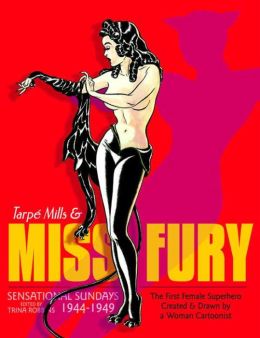 VERDICT:  After all that, you have to ask? Actually, since I know that some of you just skip down to here without reading the review, this new Dynamite release of {The Book That Must Not Be Named} is as bad as I feared it could be (Trina, you were right!), and is classified by your Obedient Servant as a DO NOT BUY UNDER ANY CIRCUMSTANCES.

(You have been warned, darlings!  Audrey)

Also, it has been rumoured that other companies were “on the prowl” to do a Miss Fury up-date, but Dynamite (sadly) got there first!

(By the way, I have just decided that since I will never crack open this book again, I might as well frame this copy, instead of giving Dynamite any more of my money!)

Soundtrack: In honor of Miss Fury’s kitty Perri-Purr (and Marla’s catsuit!), and since it seems so many of our correspondents and readers enjoy “cat videos” here is a bunch of feline fotos set to the Nellie McKay song “Pounce”, from her 2005 album Pretty Little Head:[youtube]http://www.youtube.com/watch?v=Nduo-PC22Bc[/youtube]