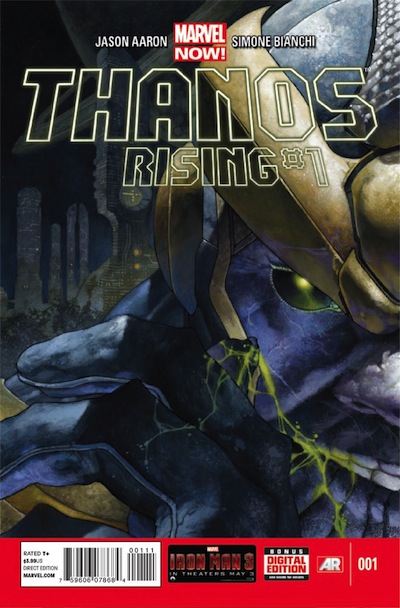 We all remember those final moments of The Avengers. In the blackness of space a hulking form sits upon a throne of rock with his face hidden from view.  Who is he? What is he? Then he turns towards us and we see it, a disturbing smile upon a hulking purple skull, and from that moment Thanos became the name of everyone’s lips.  Quickly, those in the know let those in the dark in on the fact that Marvel had just laid down the gauntlet by introducing one of their most bad ass cosmic characters to a mainstream audience. This was a being that literally loved Death and who had wielded the ability to shape the universe to his very whim.

Since that moment, as someone not in the know, I have been thirsting for a way in to the character, and now it’s here. My excitement for Jason Aaron and Simone Bianchi’s Thanos Rising #1 has been at a fever pitch the last few weeks, and while the book takes a while to get going, it generally delivers on the promise and expectations that the character and the creative team bring with it.

Thanos has returned to his home, not to gloat, but to remember where he came from. Right off the bat its important to know that this is a true jumping on point for new readers. This is the beginnings of Thanos Son of Titan and we get to see from when he was birthed to when he first started down the wrong path.  Writer Jason Aaron is an excellent writer and one who has a flair for meaty, even Shakespearian inner monologue passages.  He imbues Thanos with just such a voice, and it brings weight and depth to everything that occurs in these pages. He also has a knack for the young eternal’s cadence and speech pattern. I was consistently entertained by the adult voice coming out of this little purple child, and it helped propel the book past its slow beginnings.

The opening pages of his childhood aren’t poorly written, but they are scenarios we’ve seen many times before. There is something tiresome about a story of the young, smart outsider driven to evil by an unwelcoming public. I quickly became concerned that this was going to feel paint by the numbers and if Thanos Rising #1 was only that, I would not recommend it.  Thankfully, once the plot does kick into gear Aaron distances himself from those usual tropes and stakes out his own niche in the villain origin milieu. In fact, as the narrative spins towards its conclusion I found that it raised all the right questions and left we excited about how Aaron would eventually answer them.

The art by Simone Bianchi is like a Disney film gone evil. His characters have large eyes, and extremely expressive face, and yet there is a layer of grit not usually seen in this kind of visual style. I also love the epic skylines and architecture of Titan and the way it all has the soft focus sheen of a memory. However, there are a few inconsistent moments when it comes to the depiction of young Thanos. His height and body shape seems fluctuate between panels and while it didn’t take away from the story, it is a needless distraction that should not appear in a book of this quality.

What You Need to Know:

Nothing but whats on the page. Thanos Rising #1 is a complete introduction to the character and seems to to serve as prelude to all of his other (mis) adventures in the Marvel Universe.

Buy It – If you had asked me after the first ten pages I would have probably said to skip this title, but after the initial slow start Thanos Rising #1 sticks its landing.  Jason Aaron has a gift for imbuing larger than life characters with the conversational weight they deserve and that isn’t any different here.  Simone Binachi’s style is pleasing to the eye, but has inconsistencies that make it fall short of greatness. This issue isn’t a home run, but as I turned to the last page I found myself wishing I had the next installment right now. And in the end, isn’t that what these books are supposed to do?