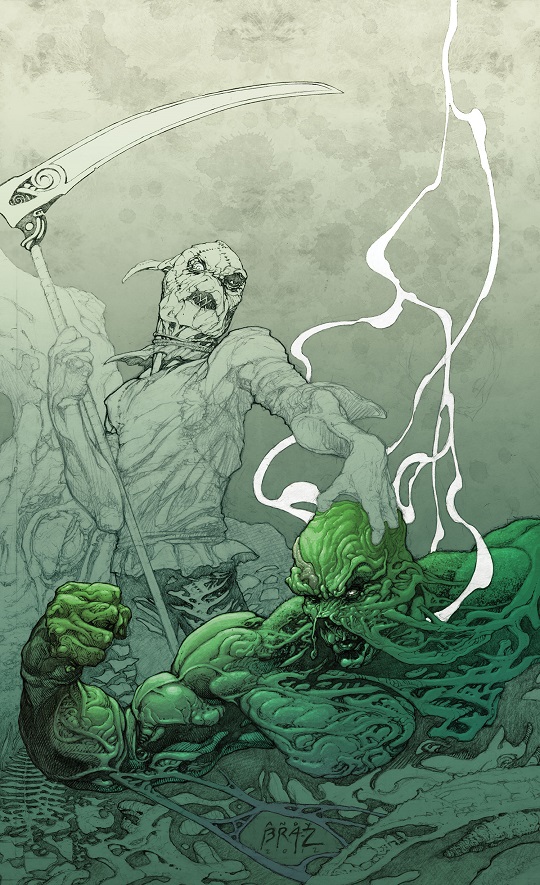 Alright internet, let’s not freak out. Yes, Scott Snyder is no longer writing Swamp Thing, but that doesn’t mean you should just drop the book. To be honest, as I pulled up issue #19 on my ipad to read on the train, I had forgotten that there was a change in the creative team. It was about five pages in when I saw all the names and credits that I remembered.

That’s why I think you should give this book a chance. Charles Soule is going to be taking Swamp Thing in new directions, but he doesn’t just make sweeping changes off the bat. This issue starts off feeling like the Snyder Swamp Thing many of us have enjoyed, but with each page we turn Soule gently leads us to this new path he is growing for us. Would I be amiss to say he is letting the story unfold organically?

We are shown how the Green is pulling at Alec Holland since he gave himself over to it completely last issue. The choices he has to make to protect the natural order of things ways heavy on him. As the Swamp Thing and avatar of the Green, his choices affect thousands and millions of lives. Soule does a fantastic job of showing us this internal struggle in Holland.

The Swamp Thing ends up in Metropolis to find Superman and talk with him about making these complicated decisions, and I think this is when the story truly begins to cross over from the Snyder-era into the Soule-era. This is a slightly different Swamp Thing than we have seen before. He’s still the same guy, but there a few instances where he is a little playful and we get to see him smiling. This is one of DC’s “darker” titles, but Soule brings some elements of fun to his first issue.

The art team also helps to transition from the old to the new team. In the opening pages, Kano uses some Paquette-esque layouts and art styles. Wilson also uses a color palette on the pages that is very familiar to those that have read the first eighteen issues. Just as with the story, the art makes that switch in style when Swamp Thing travels to Metropolis. It really shows that everyone working on this book is collaborating and working together to make sure everything is syncing up and firing on all cylinders.

Buy It. Swamp Thing #19 smoothly transitions in the new creative team with story and art that evolves into something new yet familiar. The series is headed in some new directions, but it looks like Soule will be keeping things character driven. He’s also managed to inject a little bit of “fun” at a few points in the issue as well. (Don’t worry it’s not too much, this is still a dark book afterall.)