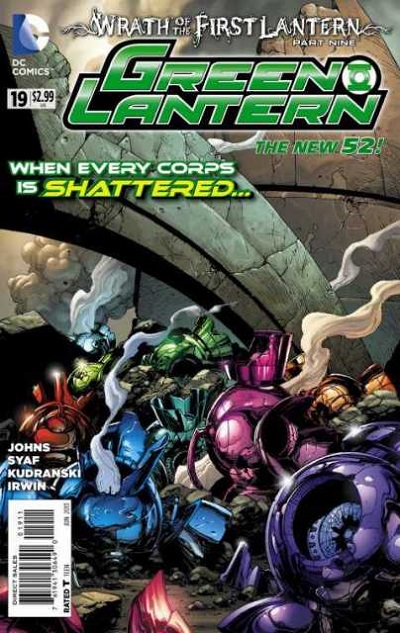 It’s amazing what a villain can accomplish with a little more juice in the tank so to speak.  As Green Lantern spins down to its final two issues in the Johns era, the First Lantern makes his presence known to our heroes in the main title.  But is the grandeur of scope fitting for the penultimate issue of the Green Lantern saga he has penned for all these years?  If you know anything about Green Lantern, then my goodness does it ever as this chapter draws to a close.

Hal is left behind in the Land of the Dead and must make a decision if he is willing to risk it all on a gambit to wield Black Hand’s ring to escape and help save his friends.  Meanwhile, the First Lantern tracks down the errant Lantern Sinestro, and runs him and those he fights for through his chronological ‘What-If Wringer’ in an effort to top off his energy levels.  But should he acquire that type of cosmic power, what is the price the universe will have to pay?

It has been no secret that the First Lantern mess-with-your-past whammy has been wearing a little thin on me as I have followed this crossover.  So when I saw him show up in this issue, which has been clipping along at a relatively fast pace tangential from all of the flashback laden issues across the line, I was a bit apprehensive to say the least.  Luckily for me, the historical recap of Sinestro is concise in nature, taking only three pages to run its course while also providing the important distinction of forward development of the character within the context of its boundaries.  Even more noteworthy, now that the First Lantern has some power at his call, the ramifications of his actions have a profound and drastic change in the status quo instead of being reset back to normal at the end of his torment.  And when I say profound and drastic, I truly mean it.  This issue ends with a triple-shot of consecutive plot turns that will have a lasting impact in the family of Green Lantern books for what initially appears to be a long time to come.

Sharing art duties this month while Mahnke focuses on the giant finale next issue, Syaf and Kudranski both bring a solid entry into the title in his stead.  Using the drastic shift in locales to differentiate their work without interrupting the flow, both bring their unique flair to the pages they pencil while still providing a meshed feeling throughout.  As per usual, with a title devoted to the emotional spectrum, the facial expressions of the characters are top priority to the artists, and it especially shows in the eyes this chapter.  Emotive without crossing the line into exaggerated, both do a splendid job of selling the twists and turns of the story, and most importantly, how they affect the characters within.

Safe buy.  Like the little green engine that could, this issue starts off a little slow, but explodes across the finish line in a manner that will have fans of the Green Lantern mythos itching for next months issue.  Hopefully, now that the First Lantern has some actual potency, the rest of the titles will fall in behind this setup for the finale with the epic scale nature that it deserves; but has been lurking just out of reach for the crossover so far.

Jump-On Point:  Green Lantern #17 would technically be the entry point, but you can easily go back to issue 1 of the current volume for more potency.

WTF Factor (Gatefold cover/story twist inside):  9 out of 10.