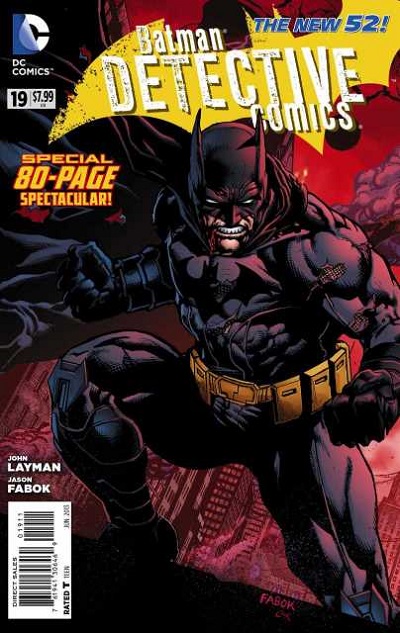 As the cover page screams, it’s an 80-page spectacular for the folks at Detective Comics as a nod to what would have been issue 900 of the title had it continued its numbering through the relaunch of the New 52.  And while those who have been following Layman’s run on the title so far will find a bit more enjoyment out of this issue than others, one still has to ask if there is $7.99 worth of entertainment within its costly (though numerous!) pages.  For my opinion, I would have to say yes, but it will inevitably be determined by if you are looking for a 900’th issue celebration, or issue 19 of Layman’s solid run thus far.  If you are part of the latter group, good news for you; though the former party may want to weigh their purchase options beforehand.

Someone has weaponized the Man-Bat formula into a fast-acting airborne contagion that is violently spreading across Gotham on the leathery wings of those it infects.  With the Bat-Family in disarray after the events of Death of the Family, Zsasz on the loose, Emperor Penguin making his play on the city, and an army of infected civilians turned Man-Bats; can Batman defeat the Chiroptoplague with the assistance of Dr. Langstrom before it consumes the entirety of Gotham?

The main story of the entire extravaganza, Layman does a great job of utilizing all of the seeds he has planted specifically for this issue throughout his run, as well as cashing in on the status quo throughout the Bat-Family of titles to definitively put them all on the same timeline.  Acting as the New 52 introduction of Man-Bat to the stage as well, there is a bit of chronological hocus pocus to make it all work in the context of current storylines (considering Talia has an army of the buggers over in Batman Incorporated), and all things considered, is handled as elegantly as possible with the framework given.  The most commendable factor of this chapter is how Layman has made it feel as a standalone story, while still advancing the overall plot of his overarching tale; which will give loyal readers some bonus points throughout, while not alienating those curious onlookers who come on for the ‘anniversary’ issue.

In the Birth of a Family backup, we get to see the past of Dr. Kirk Langstrom and how he came to develop the Atavistic Gene Recall Serum in the pursuit of scientific advancement for the good of mankind.  Told from the perspective of his wife Francine, how far is she willing to go to save the man she loves?  Bringing some clarity to the chrono-pocus described above, this backup acts as the pathos gateway into the Langstrom family while defining the chain of events that led to the main event.  Setting the stage for future stories involving the Man-Bat, it does what it is intended to do by giving the origin in the current context of the New 52 without too much fanfare

The backup most likely to turn a few heads, War Council, was provided by James Tynion IV and wipes the slate clean for fan-favorite Bane while utilizing his lackluster introduction in The Dark Knight to set his piece back on the board.  Having been defeated by Batman at that time, Bane has retreated back to Santa Prisca and is holding council with his venom-enhanced lieutenants as he discusses their plans from this point forward.  Finding that Batman was not the only agent working against him, Bane now must decide if he is willing to fight a two-front war between a certain shadowy organization that has plagued the Bat in his self-titled book as well as the hero himself.  This chapter really shakes up the direction of both Bane, as well as his obvious future involvement in the Talon series, and does a decent job of trying to salvage the wreckage of his earlier appearance by explaining it via story.

The next story, Birdwatching, acts as a driving sub-chapter in the overall Penguin drama that has been unfolding since Layman took over the book.  As the Man-Bat plague runs rampant through the streets, Emperor Penguin utilizes the distraction to rob the city blind.  But one of his lieutenants, Mr. Combustion, has a change of loyalty as the callousness of his new boss sets in.  Can he help Oswald Cobblepot beat the charges that keep him imprisoned in Blackgate, or is it another ruse in the chess game that has been played by these two birds of a feather?

And finally, we go to the other side of the thin blue line of the GCPD with a short story titled Through A Blue Lens.  As the Bat-plague winds down, four officers visit one of their comrades in the hospital who was injured by Batman after turning into one of the Man-Bat creatures that ravaged the city.  While tempers run high after one of them comes to the defense of Batman, the question comes to bear; what do the Gotham City police really think of their Dark Knight?

Artistically, each of the artists brings their own style and life to the chapters they tackle.  Fabok delivers a clean yet detailed vision to the main event, which showcases the abundance of smaller story items sprinkled throughout with a clarity that could have easily been lost in the chaos it was buried in.  Clarke brings a grim style that feels more at home in a Dark family title, and provides an edge to the innocent backstory of Dr. Langstrom that blends quite well with the tragic nature of the story at hand.  Janin continues to show off his skills in the War Council chapter, providing his usual deceptively clean look to the Bane feature that surprisingly works with the character and his gritty army.  Meanwhile, the pencils by Jonnson are incredibly detailed, and probably bring the most effective facial expressions throughout the issue.  Unfortunately Masters would be the weakest of the book, whose chapter could have used the expressive faces that preceded it in the story prior, but are more than sufficient for the storytelling at hand.

If you’ve been reading and enjoying Detective Comics under Layman – solid buy.  Because for all of the fanfare, and all of the expectations for this anniversary issue, this is just issue #19 in Layman’s run with some incredibly solid backup stories added on for the value.  While I know that some may expect more from this so-called milestone, DC is vehemently sticking to their relaunch symbolically through its presentation of this issue (as well as bluntly by surprisingly sticking to the numbering), and those expecting something more than that will be sorely disappointed.  But for anyone looking for a fun romp through Layman’s corner of the DCU, they can feel fairly assured in their purchase of this issue…even at the painful pricepoint of $7.99.

Jump-On Point:  Detective Comics #13 would be the true start of the Emperor Penguin saga, but one could easily get away with reading this as a one-shot or going back to issue #18 to get up to speed.