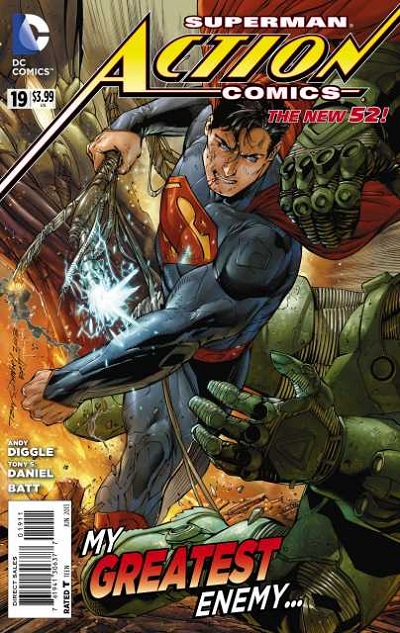 Coming off the heels of Morrison’s ambitious though entirely niche-driven run on Action Comics since it’s relaunch, Andy Diggle and Tony S. Daniel have made excited waves across the breadth of comic news sites for their part in bringing the title back to its broad appeal in the next stage of this historic titles lifespan.  That’s what I want to write at the moment, though we all know the focus of that story lies elsewhere in the current climate of the web.  Ignoring my commentary and brushing all of the melodrama aside, to me the only important question that needs to be asked is, ‘was a brilliant story lost under the shuffle of conflict?’  In my opinion after reading the first chapter of the new team’s efforts with Action Comics #19, not entirely, but there are certainly a few things to like about the issue as well.

Taking place a year prior to the current timeline of the DCU, Clark is still single and on assignment in Qurac with the target of his pining, Lois Lane.  His infatuation must be put on the back shelf for now though, as giant mecha off the coast currently threaten to annihilate the rebel forces attempting to overthrow the Quraci regime.  Meanwhile, Lex Luthor (before his imprisonment and scarring in the current timeframe) looks to juggle his world empire and push his own agenda forward in regards to the Man of Steel.  Has Superman’s archnemesis found a way around his defenses?  And what will the consequences be for the people of the world?

Andy Diggle does quite a few nice things throughout this issue in regards to the characterization of Superman.  Presenting him as confident, defensive of those being pushed around, aggressive yet restrained, and even flirtatious in his alter ego; the Superman of this artistic team is dialed down a notch on the brashness that has been a defining trait of the character elsewhere.  Where the story falls flat for myself is the manner in which the antagonists are brought to bear.  We all know Lex Luthor hates Superman, but being the first ‘real’ confrontation of the two since the reboot (discounting his advisory role to the military in earlier issues), it reads as if there is an assumption being made in this first chapter that he just should hate him without any real reason given.  This may be an unfair criticism that will be addressed in later issues of the arc, but it is something that stood out to me on my read nonetheless.  Making up for that in the time being, Diggle does do a splendid job in making Lex feel like an intellectual threat to the world in a wonderful segment involving his psychiatrist, and it really does make this non-powered individual seem like a viable nemesis to the big guy in blue.

Someone else who showed mastery of their domain was Tony S. Daniel, whose pencil work is absolutely stunning in its cinematic feel.  Capturing the grand epic scope of the threats Superman faces, while taking the time to really drive home the smaller character moments, Daniel brought his A-game to this issue.  Utilizing a cleaner format than previous chapters of Action, the book reads as a much more straightforward story; something that was jarring to me as we shifted off of Morrison’s run, but at the same time necessary to bring it back to a mass appeal.

A weak buy for me.  It’s a solid story accompanied by beautiful artwork, but is lacking that je ne sais quoi that I was hoping it would have right out of the gate to dazzle me.  With the next two issues of the arc following Diggle’s plot while scripted by Tony S. Daniel, it will be interesting to see how the story would have played out from a general perspective, but unless there is a trick or two up either creator’s sleeve, it is so far a middling start to the arc.

WTF Factor (For the gate-fold story twist within the title): 2 out of 10.