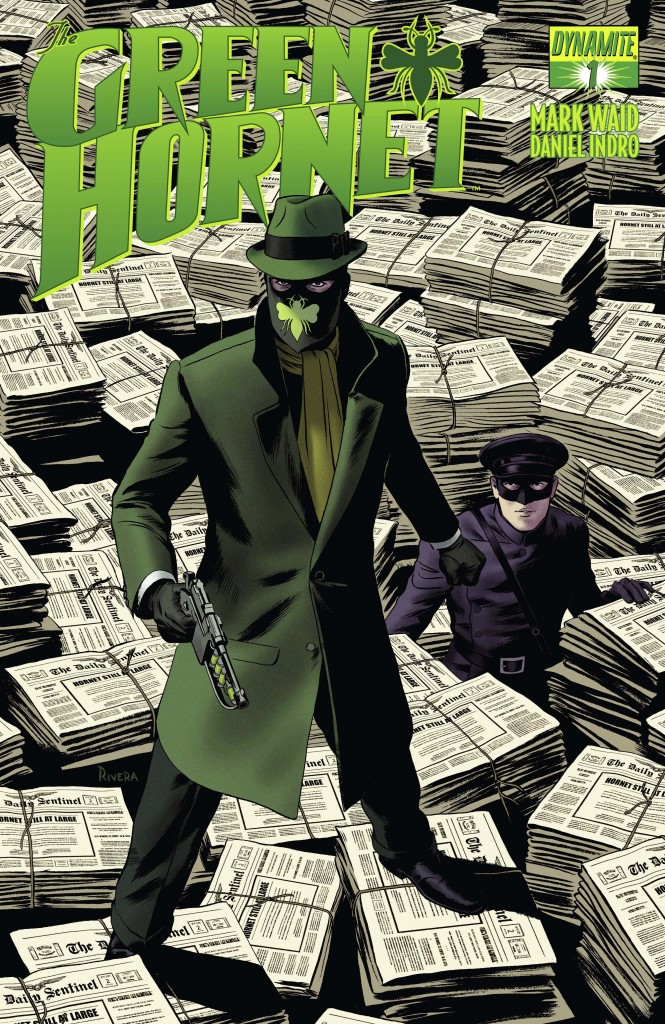 I like the idea of reading stories featuring pulp heroes, but I always end up feeling like I’m reading something that I’m on the outside looking in on.  There are references to old strips, characters I don’t know, and a prevailing sense that the book is meant for someone else other than me.  So, when I picked up Green Hornet #1 it was less because of an interest in the hero, and more because of how much I love its writer.  Mark Waid, (Daredevil, Indestructible Hulk) can get me to try just about anything,, but I wasn’t sure if even he could help me overcome the hand ups I’ve had about this set of heroes. Well, apparently he can, as Green Hornet #1 is vital feeling book with a briskly moving story, a welcoming tone and characters who pop off the page.

If you have been reading Daredevil –and if you haven’t what are you doing? – you will quickly see a lot of shared DNA between that book and this one. Mark Waid is perhaps the best in the industry at recapping a character’s origin while still making a story feel like its breaking new ground.  In Green Hornet #1 all the major points of Britt’s rise to becoming the Hornet are revealed, but Waid doesn’t use them just to lay narrative pipe. Instead, they serve to highlight and enhance the action going on in the here and now. The main thrust of the book is a rollicking adventure story, that is not mind bending in its originality, but is satisfyingly entertaining from start to finish.

Green Hornet #1 is not bereft of links to the history of the character, but it is also not a slave to it. Mark Waid has makes strong  and exciting allusions to the larger Dynamite universe, and in doing so really brings out what is so exciting about Britt Reid and his alter ego. I’ve always known that he was a hero who masqueraded as a villain. But, the novelty and inventiveness of that trate never really hit hom for me until it was put in the hands of Mark Waid.

The pencil work by Daniel Indro is flush with detail which he parlays into some wonderfully intricate panel designs. There are intances in Green Hornet #1 where Indro is juggling an ongoing action scene, a superimposed newspaper headline and an enlightening flashback moment all on the same page. It’s a testament to his skills as a storyteller that these complex set ups never become confusing and instead are one of the most engaging things in the entire issue. He also nails the iconography of the character and manages to reference the pulpier aspects of the world – his heroes are dashing, the woman beautiful and the crooks ugly – without simply emulating one exact style.

Buy It – Mark Waid has gone and done it again. Green Hornet #1 is a book that serves as an introduction to the character, an entertaining stand alone adventure of our hero at his pinnacle, and a story that lays seeds for the future of the series. It’s something that Waid does in Daredevil every month and it serves to make Green Hornet a book I’m frothing for next month. Mix in the detailed and dynamic art by Daniel Indro on top of Waid’s spot on prose and you have a book that’s exactly what the doctor ordered.