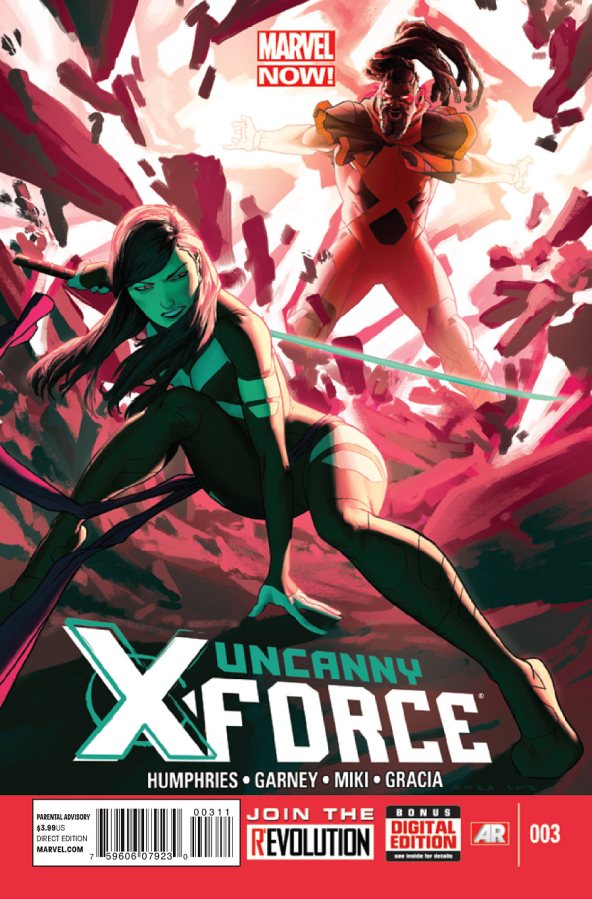 Uncanny X-Force continues its first arc in this week’s issue three. While there are several X-books on the stands, X-Force is unique in that readers can approach it without having read any other X-Men series. Though plot depends on previous actions in the X-Men universe, Humphries and the X-Force team do a fantastic job of keeping readers informed of the important events that impact this new series.

After busting Spiral’s drug dealings, Psylocke, Storm, and Puck have a head-on encounter with Bishop. While Bishop’s previous transgressions are not explicitly stated, readers quickly pick up that he hasn’t arrived to make friends. He kidnaps Ginny, a new mutant, prompting X-Force to team up with Spiral to save the girl.

One of the best parts about this series is the relationship between Fantomex and his clones. It is so uncomfortable watching the romantic companionship he and Lady Fantomex have developed. In a way, it makes sense. Who better to love than yourself? On the other hand, there is a crazy incestuous feeling that makes their relationship one of the strangest ones in the Marvel Universe. While the two have a deep love for each other, they collectively crave Betsy. Both decide to track down Betsy before their third clone, Dark Fantomex, goes after her.

Uncanny X-Force is an interesting read, to say the least. While it isn’t currently a show-stopping book, it remains an excellent team book that pulls together a variety of characters. On top of that, it’s not dependent on other ongoing books. If you’re a fan of an angry ninja, a mohawked Storm, a tough Canadian, a six-armed warrior from another dimension, and a cloned couple, Uncanny X-Force is a great team book for you.