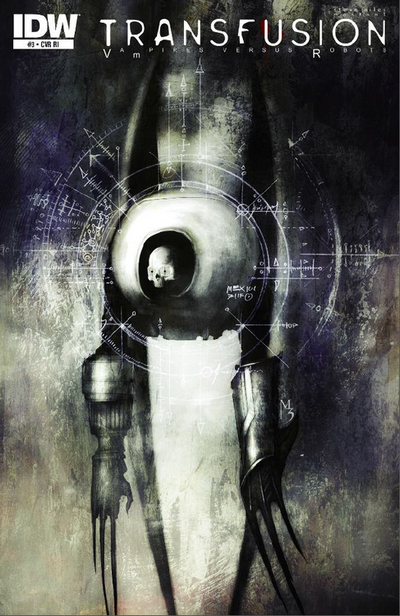 In case you haven’t been reading Transfusion (and you should be) here’s a quick catch up. The world has been reduced to three species: humans, vampires and robots who live on blood. As you may have guessed, this makes blood a very hot commodity and with both humans and vampires on the verge of extinction, it’s extremely hard to come by. The robots are vicious, tearing anything they come across to pieces. A vampire named William who lost his tribe to the killer robots has forged a tentative alliance with what could be the last two humans alive. They’ve shared observations that the robots have been cannibalizing their wounded; they hope this is a sign of a weakening in the system.

Issue #3 is the conclusion to this intense and dreary tale. The humans take a risk in trusting William and follow him to meet up with other tribes of vampires who he believes will help them defeat the robots. The humans are prepared to offer extra firepower in the way of a secret weapon. William only has to convince the other vampires that the alliance is the only way they can all save themselves and end the hunt of their blood. They hatch a plan together to find the source of the robots and try to destroy them from there. There will be a few surprises waiting for them at the end of this journey, including the unfamiliar feeling of peace between humans and vampires, however temporary it may be.

This series has been a real treat for me, combining one of my long time favorite writers and a fairly new favorite artist in one project. I do believe they make horror magic together, Steve Niles lending the storytelling backbone and Menton3 providing the perfectly surrealistic atmosphere to complete the world of Transfusion. Menton3 has a skill for taking his panels to a higher level of quality and depth than most comic book art, which gives Niles’ very classic style of horror writing an extra edge. I will say that I found the build up of Transfusion a bit more engrossing than the climax and there were some liberties taken in the artistic style of issue #3 that didn’t feel quite in sync with the rest of the series. That’s not to say I didn’t enjoy this issue, it is a fantastic piece of work in the end.

Verdict: Transfusion is a higher caliber series than most comics on the shelves right now and you should most definitely be buying it. Besides the gold standard of the books themselves, you will be supporting two extremely talented creators who do most of their work in creator owned realms. Buy it, read it and enjoy the shivers up your spine.