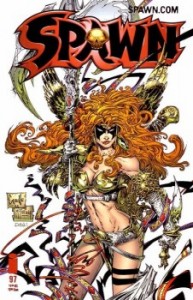 The announcement that Neil Gaiman would be returning to Marvel, and that he would be bringing with him the character of Angela – co-created with McFarlane for Spawn – raised a number of questions for fans and industry folks alike; questions like “Does Todd McFarlane have any say in whether Angela appears in a Marvel book?” and “How many  stamps do you think McFarlan can lick in an hour, roughly?”** Thanks to the intrepid folks at Newsarama that first question can now be answered. :

“Neil Gaiman and I had a resolution in our legal dispute, and as part of that he ended up with the rights of Angela,” the Spawn creator told Newsarama. “Whatever Neil chooses to do with something that he owns is at his complete and utter discretion.”

Gaiman and McFarlane waged a decade-long legal battle over ownership of Angela, although some have suggested that their true motives had more to do with the rights to the character of Miracleman. In any event, the settlement that the two men reached early last year was a confidential one, giving no real indication as to the specifics of the outcome. McFarlane’s comments to the good people at Newsarama clarify those specifics considerably.

McFarlane comes across as gracious when he tells Newsarama:

“Good stories that entertain are something that we all should applaud on any level,” McFarlane said. “Whether we’re doing it directly at Image Comics, or at our competition, it helps keep our industry that we love alive. I will sit back and be as interested as anyone else.”

It’s possible to characterize Gaiman’s choice to bring Angela to Marvel as a big ol’ “F— You” in McFarlane’s direction, but the personal politics involved here aren’t what’s interesting about the move. What’s interesting is that a character created specifically as an antagonist for another company’s anti-hero will now, somehow, be integrated into the Marvel universe. How will Marvel and Gaiman do this? And more importantly, why would they do this?

**Aren’t you a little curious?