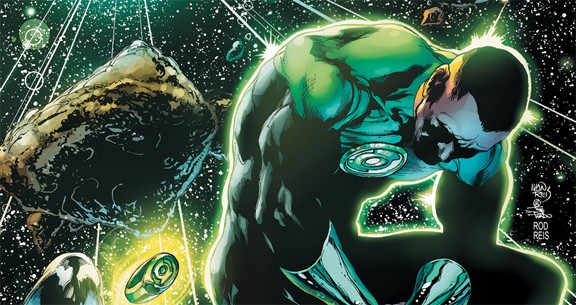 Earlier this week the news broke that Joshua Hale Fialkov would be leaving his two Lantern books (Red and Corps) due to creative differences with DC. He even had this to say about the situation on his blog:

“There were editorial decisions about the direction of the book that conflicted with the story I was hired to tell, and I felt that it was better to let DC tell their story the way they want. I’m grateful for the opportunity and I’ll miss working with the entire Green Lantern team.”

Shortly afterwards the rumors started circulating that part of the reason Fialkov left was due to DC’s plan to kill longtime fan favorite Green Lantern Jon Stewart. Needless to say that caused a huge uproar online, with forums, message boards, Reddit and even petitions all asking for DC to reverse their decision and not kill Jon Stewart. Later that day, the same reports said that DC had listened and decided not go forward with the planned story. But was the story ever really the plan?

“Lots of rumors out there. Here’s the truth: Van [Jensen] and I have never even contemplated killing John Stewart. We have plenty of plans for John. Plans that probably wouldn’t work as well if he was, you know, dead.”

DC’s Executive Director of Publicity Alex Segura followed up with this statement:

“Seeing a lot of unverified reports on this. To clarify: John Stewart is not going anywhere.”

So was the entire thing just rumors? Did the public backlash have some effect on their decision? Leave your thoughts in the comments below.