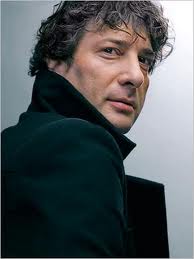 Acclaimed bestselling author and comics scribe Neil Gaiman (American Gods, Sandman, Coraline) made headlines late last year when it was announced that he’d return to DC Comics in order to pen a prequel to his much-lauded, award-winning Sandman.

Never ones to be outdone by their Distinguished Competition, Marvel recently announced that Gaiman will be co-writing Age of Ultron #10 and Guardians of the Galaxy #5 this year for the House of Ideas, marking Gaiman’s first work for the company since 2007.

While this news was more than enough to get industry folks and comic fans alike talking excitedly Marvel’s announcement that Gaiman will introduce the character of Angela – originally co-created for Spawn with Todd McFarlane – as part of the larger Marvel Universe is deservedly getting the lion’s share of attention. 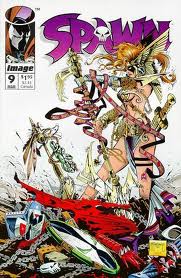 Angela, one of heaven’s army of scantily clad warrior women (because of course), was first introduced in the pages of Spawn as an antagonist for McFarlane’s spike-loving antihero. She’s since been the subject of a decade-long legal battle between the two men over ownership of the character. That dispute was settled last year, with the exact details being kept confidential. The character’s appearance in Marvel’s books has apparently been in the works for some time now, with Marvel Chief Creative Officer Joe Quesada expressing relief that they had “kept it in house as long as we did.”

Marvel’s announcement raises some interesting questions. Did McFarlane sign off on the use of Angela? Is Gaiman able to independently place the character of Angela in Marvel continuity without consulting McFarlane? What does the character’s presence mean for Marvel’s characters?

The move to bring Angela into Marvel’s continuity is certainly an intriguing one from a creative perspective. Marvel has previously stated that Age of Ultron will be a “world-changing” storyline for the company’s titles, and although the company makes those kinds of statements with clockwork regularity Angela’s inclusion seems to hint that something truly big is indeed set to occur when Age of Ultron concludes.

It’s unclear how Gaiman finds the time for all of this, given that 2013 is kind of a busy year for him. Allegations that Gaiman’s work for Marvel is simply a cover, veiling his quest to acquire the Infinity Gauntlet and remake the world entire so that all things are written by Neil Gaiman have so far gone unconfirmed. Mostly because those allegations didn’t exist until just about….now.