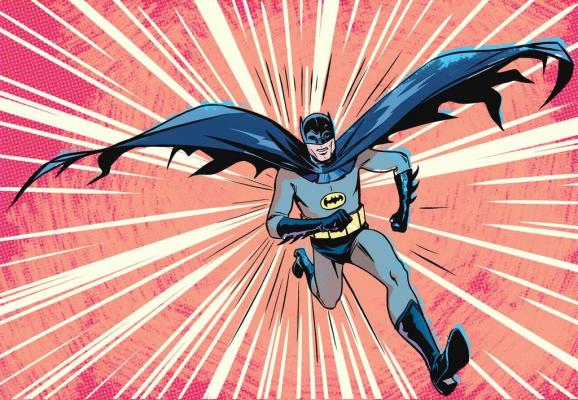 Holy announcement Batman! After years of disputes between Fox and Warner Bros, it seems like the classic 1960s Batman series will finally be getting another chance to shine. While no announcement of a potential DVD/Blu-Ray release has been made yet, something fans of the show have been demanding for years, hopefully a new digital-first series from Jeff Parker (Red She-Hulk) featuring covers from Mike Allred (FF) will be enough to hold fans over during the Summer.

Diane Nelson, DC’s Entertainment President had this to say about the new comic:

“The juxtaposition of offering a retro Batman ’66 comic as a current and modern digital first title is fun. DC Entertainment is the most prolific producer of digital first comics and, as we work to create new and compelling content, this is a great way to also preserve the legacy of our characters. It’s exciting to roll out the new Batman ’66 comic as part of this bigger initiative with our Warner Bros Consumer Product partners.”

She’s not the only one that’s excited though. Jonathan Case, the interior artist for the series, had this to add on his website:

“DC licensed the rights to all the actors from the 60s TV show (!), and we’re set to start reeling and rocking this summer. Really, if they let me develop with any superhero project, working with whoever I wanted, I honestly couldn’t have come up with a better fit: lighthearted, kid-appropriate, retro, and written by one of my favorite comics writers. The script Jeff’s writing for this series is gold. You can feel his love [for] the material, the era, the Julie Newmar.”

Batman ’66 will be released this Summer.

What are your thoughts on the announcement of this comic? Will you be reading it? Do you think we’ll ever get a DVD release of the show? Leave your thoughts in the comments below.