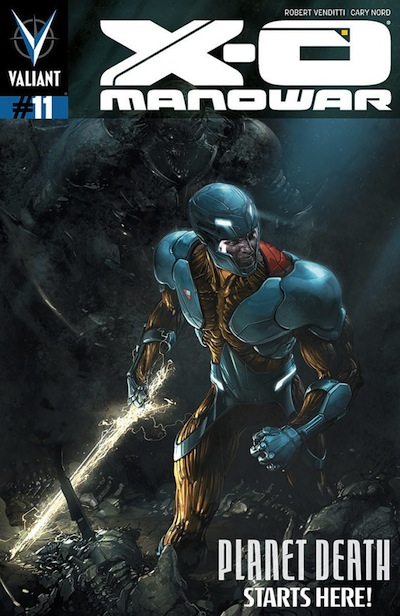 X-O Manowar’s first big event is now underway with the first part of “Planet Death.” Going into this book I was expecting mass destruction and battles from the get-go. I was surprised to find the issue starts off rather peacefully on a very colorful world. As I read through the rest of the issue I felt it really was a fitting way to start off this storyline.

In the first half of the issue Venditti and Nord show us the history of The Vine and the X-O armor, Shanhara. Without going into spoiler territory, past events from The Vines history are juxtaposed with the situation that Aric finds himself.  Venditti has brought events full circle with a strange twist of fate and irony for The Vine; the same weapon they saved their race, could be the very same that could end up destroying them.

I like the way Venditti is setting this up. We’ve known for a while that the clergy and warriors sects of The Vine have been at odds with each other, and we continue to get more insight into this throughout the issue. To Aric they are all aliens that abducted and destroyed the lives of himself and his friends; he is non-discriminate in whom he kills. Although with a last page reveal, Aric may need to change his plans for The Vine. It would interesting to see if “Planet Death” is not the result of Aric’s revenge, but stems from a divide in Vine leadership that Aric has created by donning Shanhara.

I’ve felt that Nord’s raw art style have worked well in the more action-oriented preceding issues. He manages to create a beautiful landscape on The Vine home world, but I think a lot of the credit should be given to Baumann and his colors. The bright warm colors are truly a contrast to the darker title of this arc. Nord’s art suffers at times, and there were a few panels that Aric and other characters looked a little wonky. As the action and destruction continues to unfold, I look forward to the change in style over the next 5 issues as well.

This is a buy for me. X-O Manowar  #11 kicks off “Planet Death” with some great action and a more than meets the eye story. It’s also great to get a look into the history of the armor itself. This exposition isn’t overwhelming and serves as a great way for new readers to jump on and have some fun. For you deep thinking types, the events Venditti is weaving here look to be a lot more than simple blow up the world stuff.