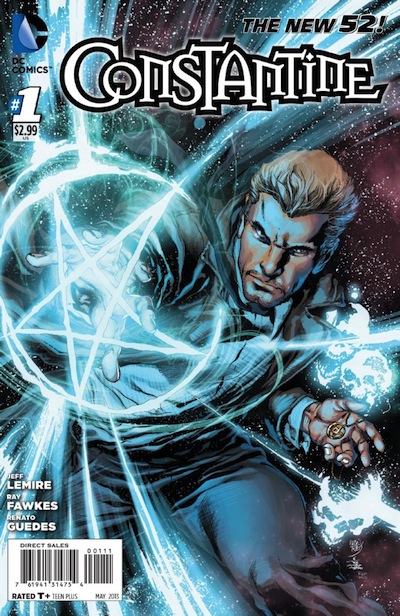 Art by Renato Guedes
Review by Bobby Shortle
These days it seems John Constantine has been popping up in every corner of the DCU.  He’s been a key player in not only Justice League Dark, but also in Animal Man,  I, Vampire, Sword of Sorcery, and Phantom Stranger.  In fact, it would seem that he has become a gatekeeper of the entire line of “dark” books being put out by the company.  His popularity in these titles, coupled with DC’s desire to bring all their biggest characters under one roof,  has led to the cancellation of the long running Vertigo series Hellblazer, and the launch of a fresh ongoing tale set in New 52 continuity.  Jeff Lemire and Ray Fawke’s Constantine #1 is that book and it’s a solid freshman effort that will assuage those fans worried that the character would be made soft by his relaunch.  However, the book falls short in a few key areas, most notably its effectiveness as a #1 issue, that keep it from achieving its full potential.
The work that Jeff Lemire has done over the past few years has been nothing less than stellar, and I’ve been a big fan of Fawkes’ time on JLD, (as well as his two issues on Batgirl), and so it comes as no surprise that Constantine #1’s writing is top notch. Fawkes and Lemire have a handle on John’s voice and manage to imbue him with the right mix of snark, world weariness, and deviousness.  This is all communicated through a wonderful internal monologue that both enhances our understanding of the man, and even presents a lot of intriguing philosophical questions about the nature of magic in the world.
John Constantine is undeniably a hero, but he’s not a very nice man; and that can be a tough cocktail to figure out.  If you go to far towards the grime and grit you end up with an unlikable asshole, but if you lean to heavily on his good deeds, then you end up stripping the character of what makes him so unique.  Well, Lemire and Fawkes must be master mixologists because when Constantine does something vile at the end of issue #1, but you still want to follow him to the ends of the earth.
Fawkes and Lemire also excel when it comes to establishing the tone of the world in which our occult detective lives.  The writers have gone out of their way to make sure this isn’t just a spinoff of JLD, but instead a new and vital feeling corner of the New 52.  The alleys, shops and streets of Constantine’s New York City have mysteries around every bend.  Constantine #1 is also brimming with a violence that feels more tactile than the usual superhero fisticuffs. I don’t imagine we will see the nudity of the Vertigo series, but Jeff Lemire and Ray Fawkes are keeping the Veritgo spirit alive in this DC title.
The real problem with Constantine #1 comes from its ability, or lack there of, to effectively welcome in new readers.  I’ve been reading Justice League Dark since issue one and even I found myself overwhelmed at times by the amount of new characters and events being brought to life here. I don’t need to be hand held through the narrative, but this is a first issue, so an explanation of just what Constantine can do and a hint of his history would have been welcome.
Renato Guedes’ thin lined art fits the title perfectly.  Guedes shows a deft hand at both the expressive character moments and the large scale supernatural histrionics. This is dynamic and engaging stuff, which bodes well for the future of the book.  Props also have to be given to colorist Marcelo Maiolo whose muted browns give the rundown apartments of NYC their feeling and whose blues give the luxurious ice hotel such pop.
Verdict:
Wait and See – There is a lot to like about Constantine #1.  Jeff Lemire and Ray Fawkes have a good handle on the character and they seem intent on keeping the seedier aspects of the Vertigo character firmly in place in the New 52.   I could listen to Constantine proselytizer about magic and mouth off to sorcerers all day, but unfortunately the story which the character inhabits in this #1 is a bit muddled. This lack of clarity, along with the book’s disregard for establishing the roots of the protagonist, may turn off new readers. I hope that isn’t the case, because Lemire and Fawkes are great writers and so I have faith that the faults of the book will be quickly corrected.  Combine that with beautiful and detailed art by Renato Guedes and you have a title with a tremendous amount of potential.