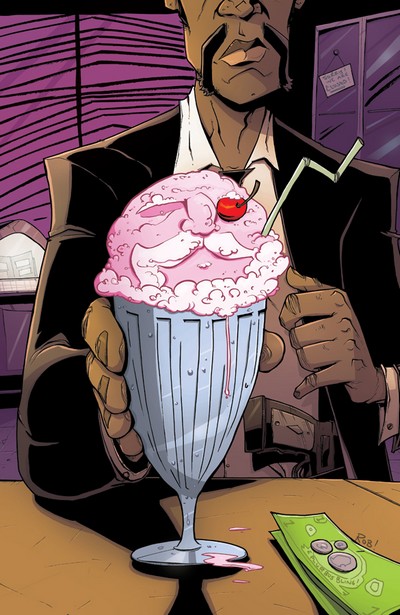 Agent Chu and Agent Colby are back on the beat together, both recovering from some nasty wounds. Colby’s are physical, Chu’s emotional. It’s Monday and bad stuff is happening, as is often the case on this despicable day. The Immaculate Ova Cult are causing chaos in their revolt against chicken, taking hostages and killing USDA officers in the process. The FDA has been called in as back up, Chu and Colby heading the group.

Tortillas are becoming deadly weapons and fellow agents can’t be trusted. Loyalties are exposed. Tony is busting through every case he can get his hands on in hopes of finding his sister’s murderer. He’s on edge and won’t let anyone get in his way. There’s a lot going on in this issue and I’m not going to tell you the whole story, you should pick it up and read it yourself.

There isn’t a whole lot to say about any issue of Chew because one thing this series is is consistent. It’s funny, tough and has lots of illegal chicken. The art is perfect for what the story needs.

Verdict: Always buy Chew. If you aren’t reading Chew by now, you’re either not paying attention or you have no sense of humor. Just read it.